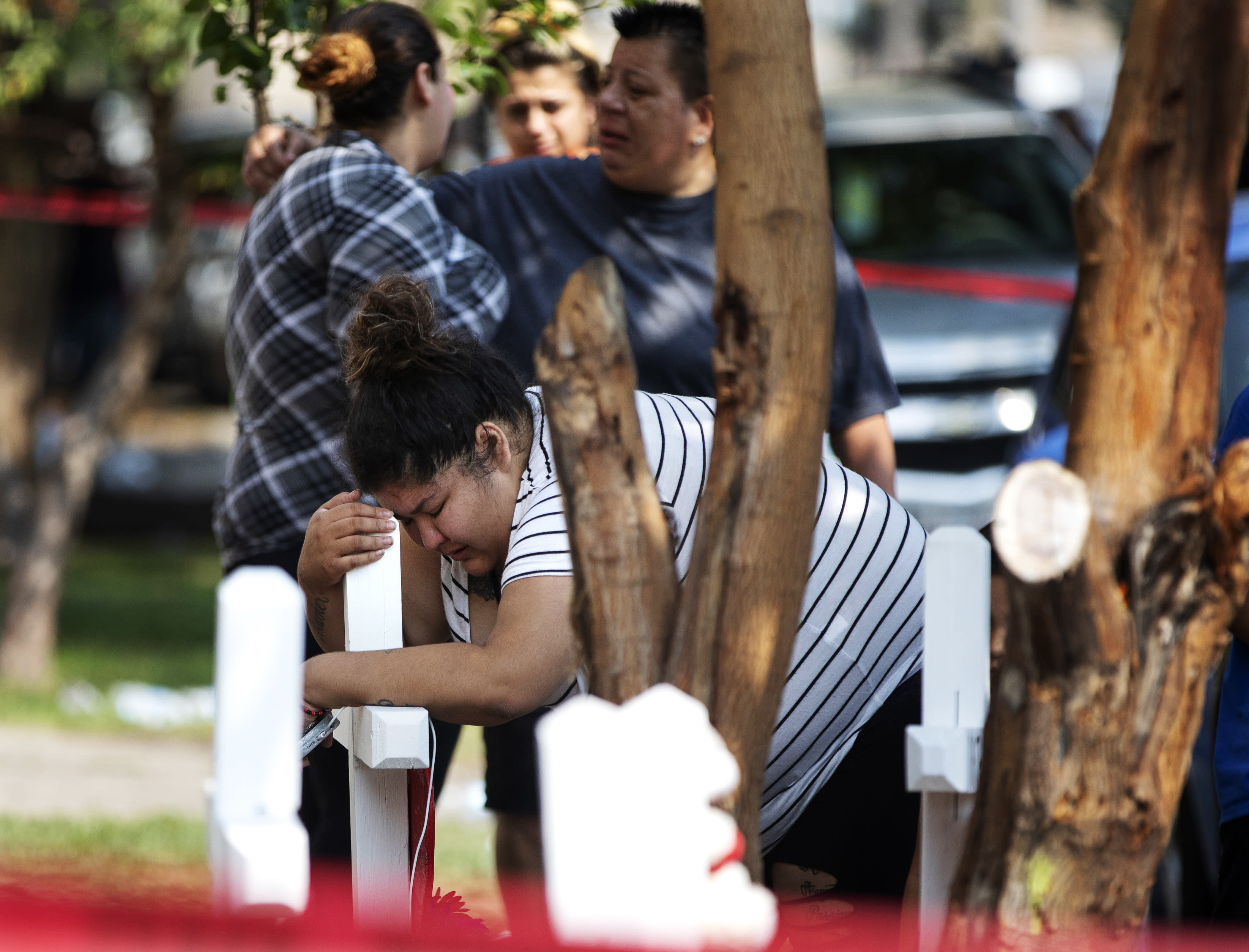 In this Sunday, Aug. 26, 2018, photo, Amber Ayala, who lost siblings in a fatal fire, hugs a wooden cross at the scene in Chicago. Several people were killed in the fire including multiple children. (Erin Hooley/Chicago Tribune via AP)

CHICAGO (AP) — The Latest on the fire that killed nine children in Chicago (all times local):

A weekend fire in a Chicago apartment building has claimed a 10th life.

The Cook County Medical Examiner’s office says in a news release that 14-year-old Adrian Hernandez was pronounced dead at Stroger Hospital in Chicago at 11:12 a.m. Tuesday.

All ten victims of the pre-dawn Sunday fire at the apartment on the city’s Southwest Side were children. All but two of them died at the scene.

Fire officials say investigators are trying to determine the cause of the blaze, though they’ve ruled out arson. There were no working smoke alarms at the home.

There were no adults home at the time of the fire, and the state Department of Children and Family Services has said it is looking into “allegations of neglect.”

The state child welfare agency is investigating “allegations of neglect” after a Chicago apartment fire left nine children dead and one critically injured.

Illinois Department of Children and Family Services spokeswoman Alissandra Calderon would not discuss specific allegations. But after the fire department determined that no adults were in the apartment during Sunday’s pre-dawn fire, one key question remains: Why were the children left alone?

Calderon says several families were affected by the fire, and that the agency has had past contact with three of them. But she says there were no pending DCFS investigations involving those families at the time of the fire.

The fire department has not determined the cause of the deadly blaze.

A Chicago Fire Department official says it appears the nine children who died in a weekend apartment fire and another who remains in critical condition were overcome by smoke as they slept and never awoke to make an escape.

Larry Langford says firefighters found the bodies of 10 juveniles scattered about the apartment where they had been having a sleepover. He says the fire department mistakenly initially believed that two of the victims were adults.

He says there’s no indication that any of them were trying to flee when the fire started before dawn on Sunday.

Investigators are still trying to determine the cause of the fire that started on a rear porch. Langford has said the lack of any working smoke detectors turned the fire deadly.