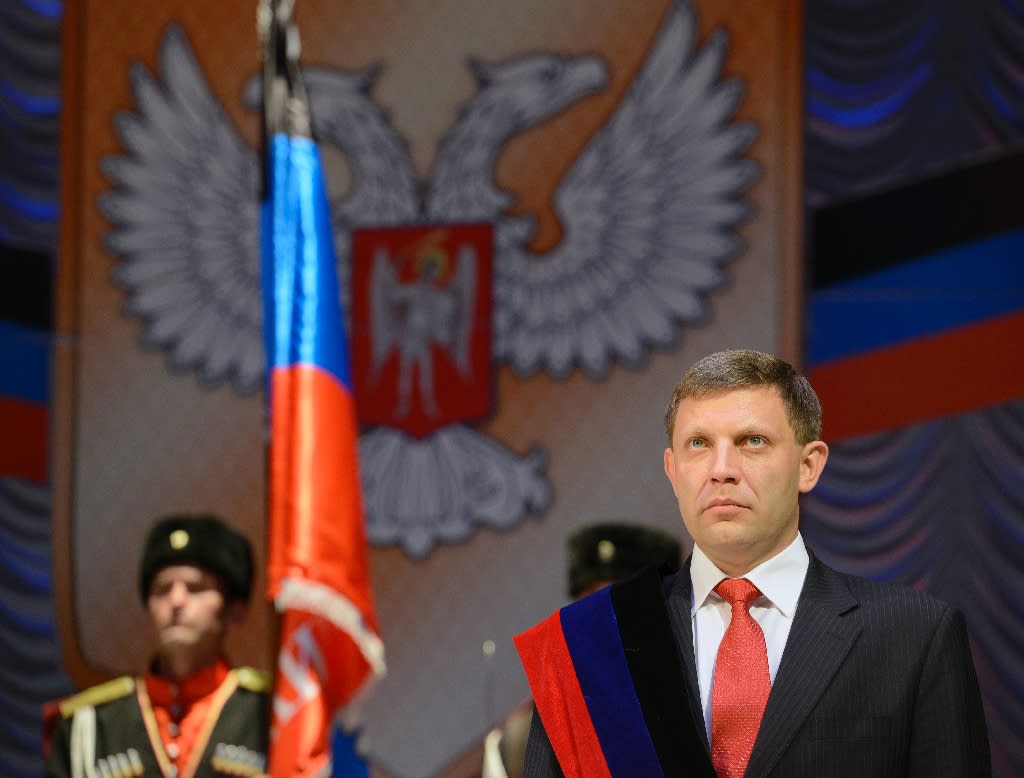 Picture of the leader of the self-proclaimed Donetsk People’s Republic, Alexander Zakharchenko, as he takes the oath during an inauguration ceremony in the eastern Ukrainian city of Donetsk in November 2014 (AFP Photo/Alexander KHUDOTEPLY)

Donetsk (Russia) (AFP) – The leader of Ukrainian separatists in the east Alexander Zakharchenko, who died in an explosion in the centre of rebel hub Donetsk, is the latest rebel official to be slain in a series of apparent murders.

Since the start of the conflict between the Moscow-backed separatists in eastern Donetsk and Lugansk regions of Ukraine, several field commanders and politicians in the so-called “people’s republics” under rebel control have died in explosions and shootings.

In February 2017, Mikhail Tolstykh, a rebel battalion commander known by his nom de guerre Givi was killed in an rocket attack on his office in Donetsk.

The 36-year-old headed the Somali battalion but also became a media personality after featuring in a series of YouTube videos together with Arseny Pavlov, another separatist fighter nicknamed ‘Motorola’.

The two became the most recognisable faces among the separatists and were frequently interviewed by Russian state television channels.

Motorola, 33, was himself killed in October 2016 when a homemade explosive device went off in his apartment block.

Both murders were called terrorist attacks by local authorities.

Mozgovoi, a former folk choir singer and poet turned commander of Prizrak (Ghost) battalion in Lugansk region, was killed in May 2015.

He and several others, including his press secretary and armed guards, were ambushed while travelling in a rebel-controlled area.

His convoy was struck by a bomb, and survivors subsequently mowed down with gunfire.

The 40-year-old was believed to have had disagreements with Lugansk rebel leader Igor Plotnitsky and the Kremlin, but authorities said the murder was the result of sabotage by Ukraine’s spies.

Plotnitsky was subsequently injured in a suspected car bombing in August 2016 and resigned in November 2017 amid infighting.

The leader of an ethnic Cossack militia Pavel Dremov was killed together with his driver in December 2015 when his car exploded at a petrol station on his wedding day.

Authorities said at the time that the bomb was planted in his car. He was 39 at the time of his death.

Dremov criticised the Lugansk rebel leadership and accused them of stealing Russian humanitarian aid, also speaking out against the ceasefire with Ukrainian troops.

Nicknamed ‘Batya’ or ‘Father’, Dremov ran his private fiefdom in Lugansk region’s town of Stakhanov which amounted to a rebellion within a rebellion.

Alexander Bednov, known by his nom de guerre ‘Batman’ was a former Ukrainian police employee who became a prominent rebel in Lugansk region.

He was shot dead by the security services of the so-called Lugansk People’s Republic. Local authorities later said he was wanted for various crimes but resisted arrest and began shooting back.

Bednov headed the eponymous Batman battalion which fought against Ukrainian troops. His former battalion later said that his car was set on fire, and six other people were killed with him.