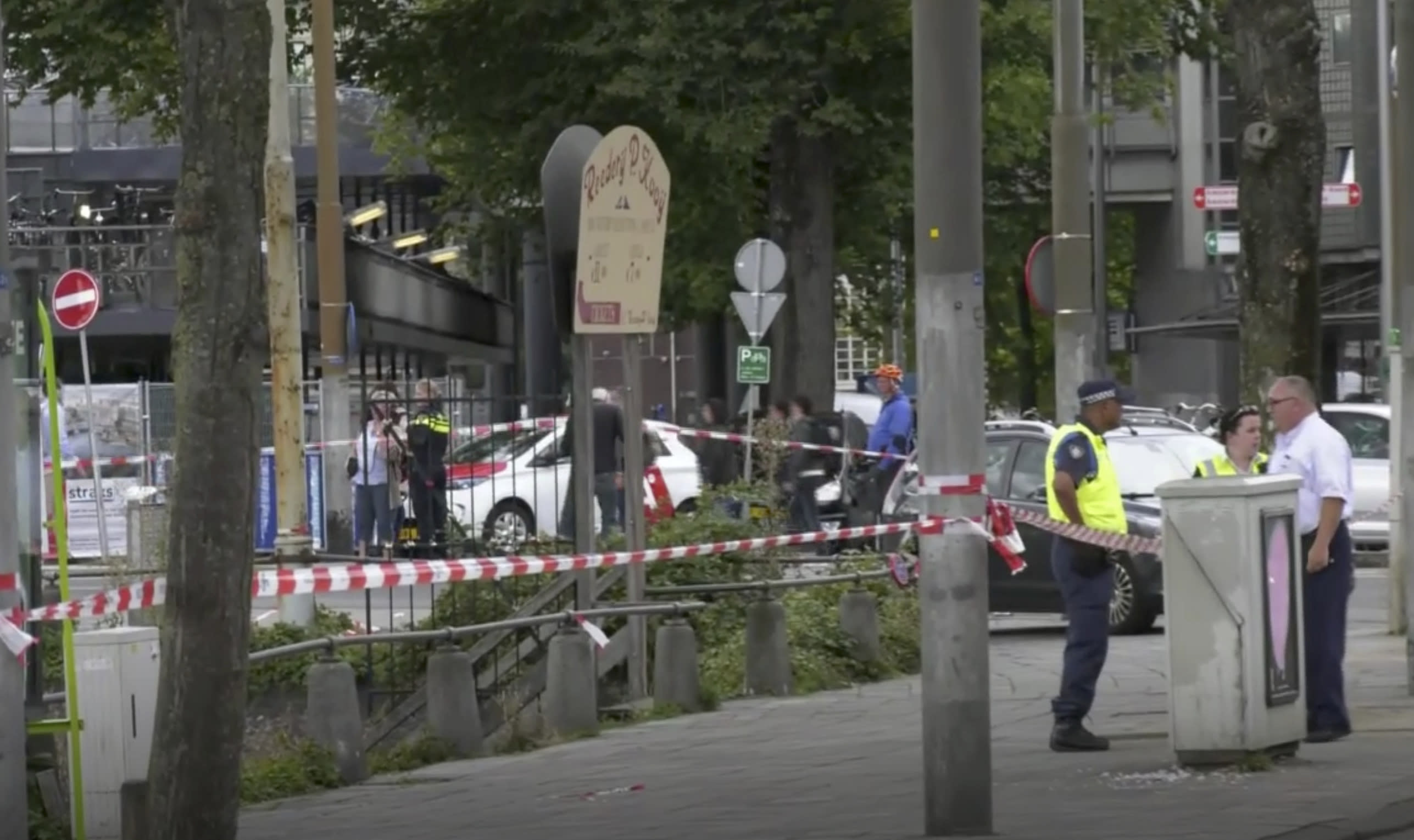 In this image made from video, Dutch police officers stand near the scene of a stabbing attack near the central daily station in Amsterdam, the Netherlands, Friday Aug. 31, 2018. Police the Dutch capital shot and wounded a suspect Friday following a stabbing at the central railway station. Amsterdam police said in a series of tweets that two people were injured in the stabbing and the suspect was then shot by officers. (AP Photo/Alex Furtula)

AMSTERDAM (AP) — The Latest on stabbings at a train station in Amsterdam (all times local):

The Netherlands’ counter-terror chief says the country’s threat level will remain at four on a scale that tops out at five following a double stabbing at the city’s main railway station that officials say had a “terrorist motive.”

Dick Schoof says on Twitter that: “Sadly, this reprehensible act fits into the current threat assessment.”

A 19-year-old Afghan citizen has been arrested in Friday’s attack at Central Station. Two U.S. citizens were stabbed and authorities say they are hospitalized with serious but not life-threatening injuries.

Authorities in Amsterdam say a 19-year-old Afghan citizen who was shot and detained after a double stabbing at the city’s main railway station had a “terrorist motive.”

The Dutch capital’s government said in a statement issued Saturday that investigators reached that conclusion based on the suspect’s first statements to police.

The suspect allegedly stabbed two American tourists on Friday before police shot and wounded him. He holds a German residency permit and was identified as Jawed S. in line with Dutch privacy rules.

The Americans are recovering in a hospital. Their identities have not been released. The suspect also is hospitalized.

Amsterdam City Hall says German authorities searched the suspect’s home and seized data storage devices that would be analyzed as part of the investigation.

The suspect is to be arraigned Monday at a closed-door hearing. The exact charges he could face have not been released.

The U.S. ambassador to the Netherlands says that two people stabbed in an attack at the Dutch capital’s main railway station on Friday are both American citizens.

Police shot and wounded a 19-year-old Afghani man immediately after the attack and are questioning him as a suspect.

Ambassador Pete Hoekstra issued a written statement Saturday saying embassy officials had been in touch with the victims or their families. Police say they have serious but not life threatening injuries.

Hoekstra says, “We wish them a speedy recovery and are working closely with the City of Amsterdam to provide assistance to them and their families.”

Police say they are still trying to establish a motive for the attack and say it was possibly motivated by extremism.