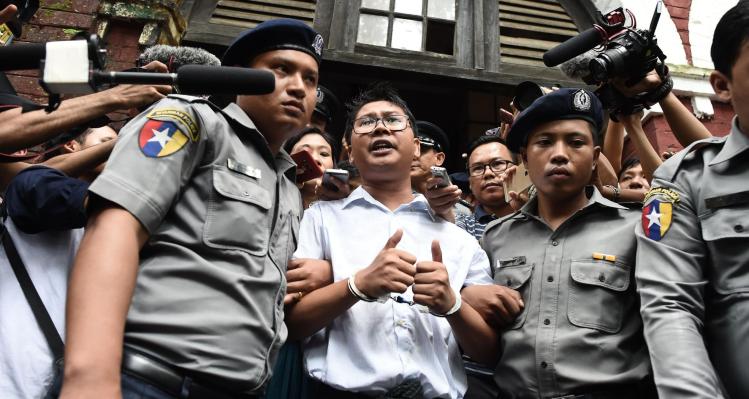 Reporting the news isn’t illegal, unless you’re in Myanmar. The Southeast Asian country this week sentenced two reporters from Reuters to seven years in jail in response to an investigative report that uncovered atrocities committed against Rohingya Muslims by the army.

Wa Lone and Kyaw Soe Oo, the two Reuters staffers, have been in custody since December. They were arrested for possession of official government documents which had been given to them by a member of the police force as part of the investigation. That puts them in violation of the colonial-time Official Secrets Act which bars civilians from accessing government information.

The landmark decision has been derided worldwide. Critics argue that the Reuters reporters are being made an example of because they surfaced the untold story of an atrocity that involved the military, which controlled Myanmar for nearly 50 years until general elections were introduced in 2015.

The ethnic tension for the Rohingya in Myanmar has gained global awareness in recent years, but less is known about the role that the military has played in both escalated tensions and also through outright atrocities. The Reuters report which the duo contributed to detailed how members of the army, alongside Buddhist villagers, killed 10 Rohingya men in a coastal village.

“Today’s appalling verdict has condemned two innocent men to years behind bars. Wa Lone and Kyaw Soe Oo face lengthy jail terms simply because they dared to ask uncomfortable questions about military atrocities in Rakhine State. These convictions must be quashed, and both men immediately and unconditionally released,” Tirana Hassan, Amnesty International’s Director of Crisis Response, said in a statement.