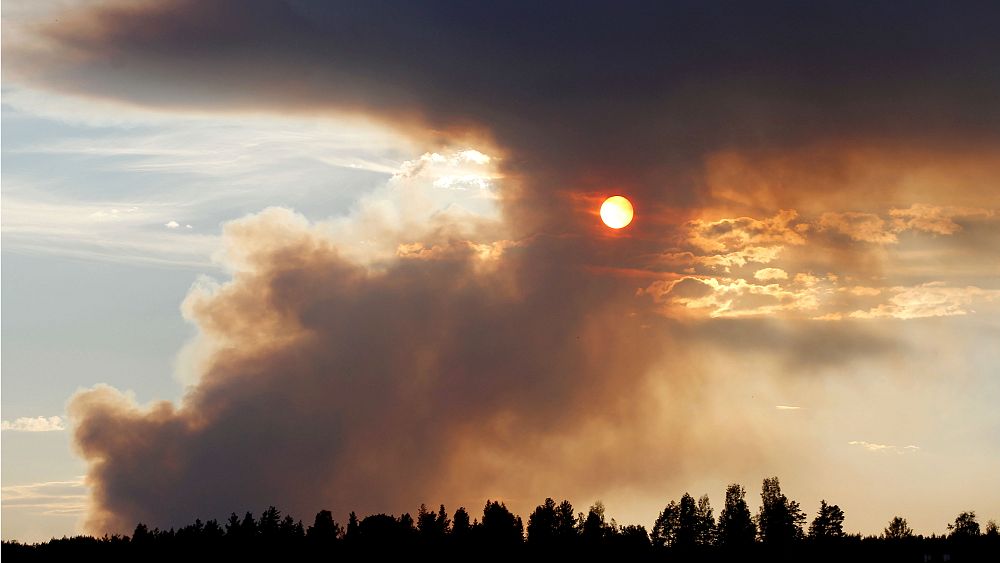 Climate change is set to play a key role in a European election for the first time on Sunday, it’s been claimed.
Sweden’s scorching summer and subsequent forest fires have given unprecedented prominence to global warming.

The country will hold a nationwide election on Sunday.

“The only example I know of climate having played a role in elections is in Australia in 2007,” said Wendel Trio, director of Climate Action Network (CAN) Europe.

“So it’s the first in Europe at a national level and the reason for the climate coming up so strongly in the Swedish election are two-fold.

“First, the summer heat and the forest fires made climate change and its impact much more visible and concrete in people’s minds.

“Secondly I think the fact the right-wing Sweden Democrats positioned themselves as sceptical to the need for climate policy has actually helped to stimulate the debate.”

The leader of the right-wing Sweden Democrats, Jimmie Akesson, claimed in mid-August the government was trying to score cheap political points by talking about the climate after “one summer” of hot weather.

Akesson’s decision to take on the controversial topic has boosted the Green Party in the polls, claimed Trio, who, as junior coalition partners in the current government, faced not even reaching the 4% vote share threshold needed to get into parliament.

Voter surveys have also indicated the anti-immigration Sweden Democrats fortunes have weakened over recent weeks, although it is unclear whether this is linked to the party’s comments on global warming.

What is apparent is climate change is a key topic for Swedes right now: it’s even seen a 15-year-old girl refuse to go to school to draw attention to the problem.

The Institute for European Environmental Policy (IEEP), a Brussels-based sustainability think tank, said the importance of the topic had also seen a range of political parties publish new climate policies, from an EU-wide carbon tax from the Liberal Party to the Green Party’s plan to increase investment.

“When the greens first got into parliament some 25 years ago it was clearly linked to discussions about massive algal blooms that summer and dying seals, which was very visual in the media,” said Mia Pantzar, a policy analyst at IEEP.

“In that time people did change their vote in favour of stronger environmental policy in the elections.

“What is different now is that the events have forced all parties to formulate concrete plans for [climate] action.”

But will this year’s heatwave and forest fires signal a sea change in voter behaviour longer term?

“I wouldn’t say it will create a change but what I can say is the extreme summer we had will be repeated because of climate change, more often than we would want,” said Trio.

“So there will be more of these occasions. If there is an extreme forest fire in Greece or Portugal just before an election we will see the same.”

While immigration and healthcare are higher on the agenda for some, parties hoping to pick up the environmental vote could be boosted by the worldwide Rise for Climate marches, which are taking place the day before the election, including in the Swedish capital Stockholm.

“One of the last polls saw the Green Party cross the minimum threshold [the percentage of vote share for getting into parliament] and that could have a huge impact because then they will stay in government,” said Trio.

“There’s been quite a bit of debate about the direction the European Union is going, including the long-term climate strategy and Sweden is proposing to completely decarbonise by the middle of the century and having a Swedish government that continues pushing the boundaries does have an impact on the debate. You need countries to speak out.”