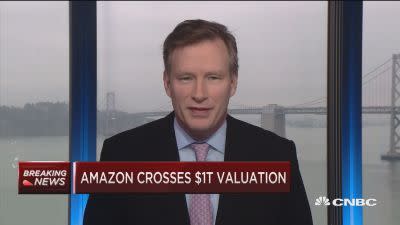 Of the 47 analysts with ratings on Amazon, 45 (or 96 percent) say analysts should keep accumulating the shares, according to FactSet. That’s the highest ratio of buy recommendations among the 10 most valuable U.S. tech companies.

Apple AAPL , which last month became the first U.S. company to eclipse the $1 trillion barrier, has a buy rating from just 62 percent of analysts.

The level of Amazon bullishness is yet another sign that Wall Street is willing to pay up more for growth than profit, particularly when it comes to a company with so many engines for expansion.

“AMZN is a consensus long and has the least amount of debate of the mega-cap internet stocks,” wrote Rob Sanderson, an analyst at MKM Partners, in a report on Aug. 22. Sanderson said Amazon Web Services is “in a sweet-spot for margin expansion” and sees the company making a big splash in grocery delivery.

From Amazon’s dominance in online retail and its expansion into private labels to the rapid growth of AWS and the penetration of the Alexa assistant into more areas of our personal and professional lives, Amazon is everywhere. Sales in the latest quarter jumped 39 percent, more than double Apple’s 17 percent growth rate.

Apple is much more profitable than Amazon. The iPhone maker recorded an operating margin of 24 percent in the latest period, while Amazon’s was 5.6 percent.

Analyst price targets on Amazon have yet to catch up with their ratings. The average 12-month price prediction for Amazon shares is $2,142.64, according to FactSet, which is only about a 5 percent increase from here. That’s hardly a move at all for Amazon, which has surged 75 percent this year after gaining 56 percent in 2017.