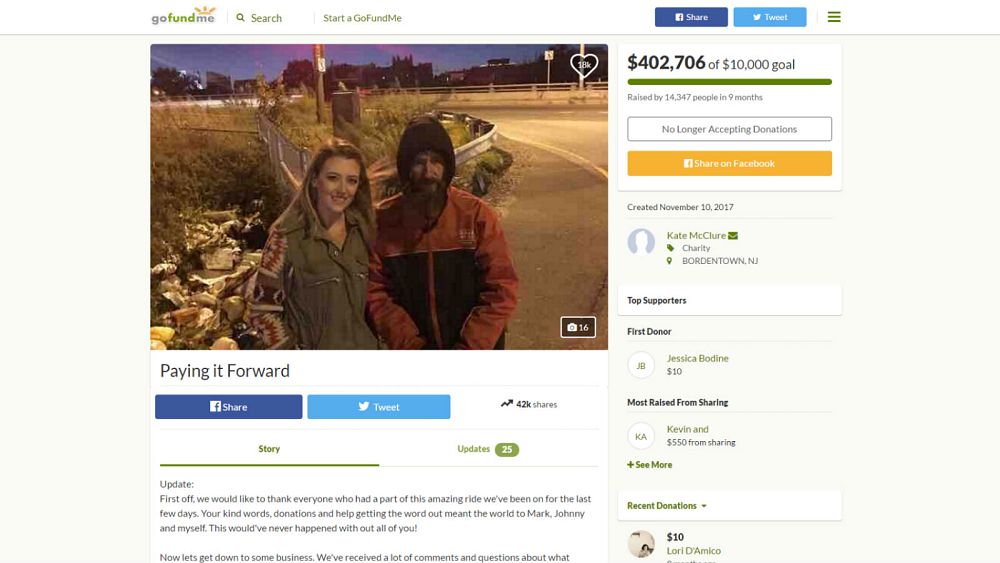 An attorney representing a homeless man who is trying to recover hundreds of thousands of dollars raised in a GoFundMe campaign that went viral claims he was told that there is no money left.
Chris Fallon, an attorney representing homeless veteran Johnny Bobbitt Jr.,told NBC Philadelphia that he learned the more than $402,000 that was raised is gone in a conference call with attorneys for the couple who headed the campaign last year, Katie McClure and her boyfriend, Mark D’Amico.

“Shock. I was shocked and just appalled,” another of Bobbitt’s attorneys, Jacqueline Promislo, who was on the conference call, said in a phone interview with NBC News later Tuesday.

The couple’s attorney, Ernest E. Badway, in an email declined to comment to NBC News.

The initially heartwarming tale that began when Bobbitt gave McClure his last $20 when she ran out of gas on a freeway exit ramp last November outside Philadelphia turned into a legal dispute in late August when attorneys for Bobbitt filed a lawsuit to try and force the couple to turn over whatever was left of the money that was raised.

On Thursday a New Jersey judge ordered McClure and D’Amico to turn over whatever was left.

In an interview with NBC’s “Megyn Kelly Today” last week, the couple said that they did not use any of the money that was raised, but they also said they believed there could be as little as $150,000 left after they said Bobbitt spent money on family, a trailer, truck and drugs.

They said that they set up an account for Bobbitt but not with all of the money, because they were worried that he would spend it on drugs.

“We saw the pattern that was developing … that he was going to do something foolish, and end up right back where he was,” D’Amico told Kelly. The couple claimed Bobbitt went through $25,000 in 13 days.

In court documents filed by Bobbitt’s attorneys, the couple was accused of using “substantial portions of the money raised for their own personal use.”

In court last week, Badway said that Bobbitt had received at least $200,000 of the funds, the Philadelphia Inquirer reported.

Last week, the judge who ordered them to turn over the remainder of the money said that the couple must give the money to their defense lawyer, who was directed to place funds into an escrow account as the case continues, NBC Philadelphia reported. The judge also ordered McClure and D’Amico to provide a full accounting of the money they raised.

Promislo said that Bobbitt is currently homeless and focusing on getting into rehab. She said he was addicted to heroin, was successful in a program for a long period of time and relapsed, and was getting suboxone, an opioid-treatment drug, but when he was unable to get the hard-to-obtain medication he also bought it illegally.

D’Amico told Megyn Kelly last week that thy were “in the process of having everything looked over by our lawyer” and that the money would soon be out of their hands.

“The issue is not what Johnny did with it,” Promislo said. “The issue is what did Kate and Mark do with the money.”

“Now they’re attempting this very patronizing [argument] that they’re trying to protect him from himself,” she said.

There is a hearing in the case scheduled Wednesday morning, Promislo said.