The final quarter of 2018 is beginning soon and along with it comes Malaysia’s most vital online sale periods. This includes the 11.11 (also known as Singles Day), Black Friday, 12.12 Sale and other year-end sales. This is ecommerce’s most crucial period as revenue and online traffic is set to double during the sale festival.

A flashback to 2015, most consumers would have little or probably no idea what Singles Day or what 12.12 sale is. But in 2017 and beyond, these two sale periods are now the most vital events in Malaysia’s digital space. This was evident last year when we reviewed what were the most popular online sale periods of 2017 and this trend is expected to continue for the next foreseeable years.. 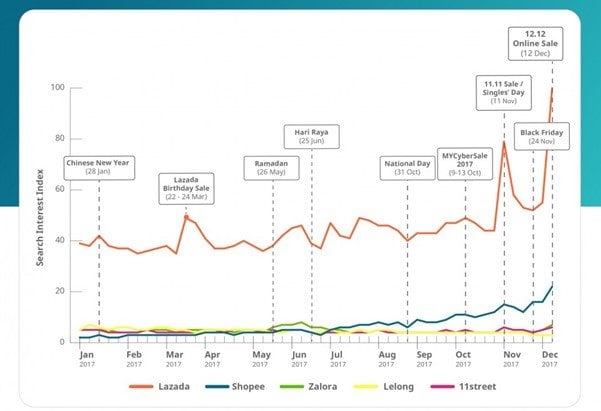 Get The Full Series in PDF

Get the entire 10-part series on Charlie Munger in PDF. Save it to your desktop, read it on your tablet, or email to your colleagues.

What’s more interesting is that these  online sale periods garnered more interest when compared to more traditional sale periods which has been around for decades such as the Chinese New Year sale or Hari Raya sale periods. At this time, all ecommerce platforms experienced exponential growth in online traffic. Lazada recorded US$250 mil (RM1 bil) by end December 2017 in gross merchandise value (GMV) when they concluded their online sale event and this trend is expected to grow year on year.

This shows how fast consumers’ preferences can change in just a few years. As such, the key winners in the industry are the ones who are able to keep up with consumers’ behaviour and take it to the next level to become trendsetters.

So, what can we learn and adopt from trendsetters in ecommerce? The best role-models to look up to are the most successful locally based platforms in Malaysia. The Map of Ecommerce currently ranks Lelong.my, Hermo and Fashion Valet as the three most visited platforms as of Q2 2018. Here’s what we can learn from them.

In the modern economy of ecommerce, staying relevant according to current trends is a very important. One such player who has braved through the tough times and remained relevant is Lelong.my.

To date, Lelong remains one of the key pioneers in ecommerce in Malaysia. Unlike other players, Lelong is the only ecommerce platform that was established prior the turn of the millennium. They have been around since 1998 and recently celebrated their 20th anniversary.

Richard Tan, co-founder of Lelong stated that he believes in starting out small and building on a niche before expanding. During the 90s, there was no lack of hype surrounding online shopping and Amazon’s huge success in the US. However, consumers were still very new to online shopping and unsure if merchants can be trusted. This issue was similar from a business’ point of view as well where retailers have only relied on traditional brick and mortar shops to sell their products or services. Lelong identified this challenge and decided to take on various initiatives to build trust between sellers and buyers.

After several years as an auction site, Lelong evolved to become a B2C (business to consumer) marketplace and has remained relevant to shoppers in today’s uber-competitive internet industry. This was evident in the study on the History of Ecommerce Malaysia where Lelong has consistently remained among the top five most search ecommerce platforms in the past 10 years.

Screenshot of Lelong.my in 2012 – History of Ecommerce Malaysia

However, their journey was never smooth sailing. Richard was never disheartened even if it took 7 years before Lelong became profitable in 2005 as they saw consistent growth year over year. Today, the ecommerce platform has remained profitable as a private company and on a monthly basis garners more than 5 million visitors in Malaysia. Lelong continues to evolve its platform to better meet consumers’ needs as seen in its recent rebranding exercise. At the same time, Lelong continues to play a significant role in the digital ecosystem by empowering and equipping local businesses for the digital economy.

While various ecommerce platforms were able to come up with original products and solutions for the market, sometimes it might be best to replicate and localise successes seen abroad. This was the inspiration behind Fashion Valet (FV). In an interview the co-founder, Vivy Yusof stated her inspiration for a fashion ecommerce platform came while she was exposed to consumerism in the United Kingdom. With a just a few clicks on the mouse, consumers can easily have products delivered to their doorstep. She experienced further validation for an online fashion platform when she experienced frustrations being stuck in traffic jams, crowded parking lots at retail areas and the lack of options in the online space.

Screenshot of FashionValet in 2011 – History of Ecommerce Malaysia

Together with her then boyfriend Fadzarudin Shah Anuar (now her husband) FV was launched in 2010 with a minimal budget of RM100k from their personal savings and loans. In the following years, FV garnered a huge following and has successfully obtained funds securing approximately USD$75 million in equity funding to date. Today, they are listed as amongst the most well-funded startups in Southeast Asia by CB Insights, receives about 438k visitors on a monthly basis and has four flagship physical stores across Malaysia

Though FV was born out of a western ecommerce model, Vivy was able to localise her business by giving a personalised touch in the way she connects to consumers. This was mainly done through social media channels where Vivy was able to directly connect with users. 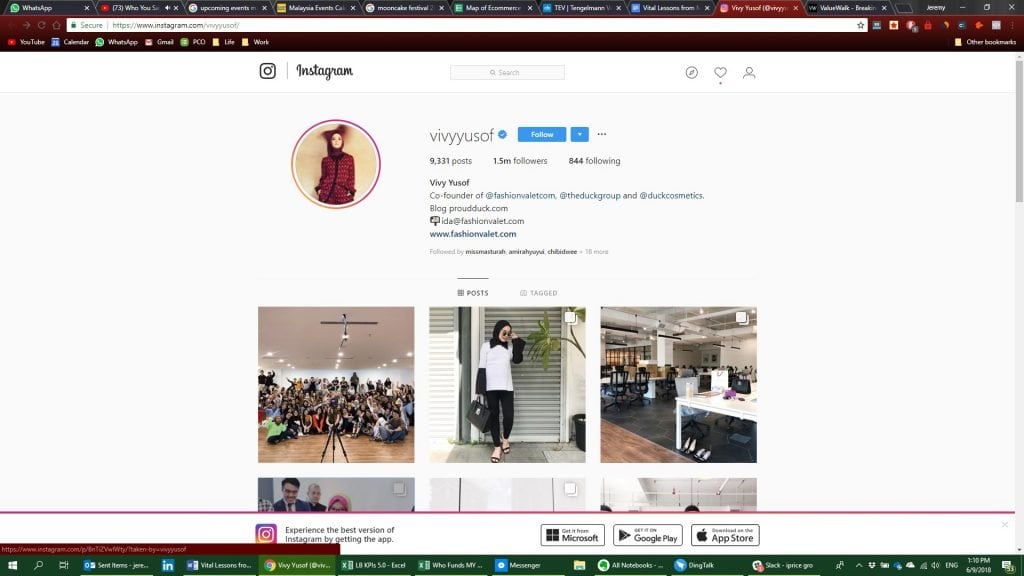 Her ability in connecting with Malaysians has been apparent years before she initiated FV. Under the domain proudduck.com, Vivy regularly blogged on topics such as love, life, motherhood and family. Through the years, she garnered a huge following of more than 1.5 millions followers on her Instagram account, 86k YouTube subscribers and more than 40k visitors on her personal blog page.

Her personal connection with consumers was not void of challenges as well as she often received criticisms from various users such as the recent fake ‘telekung’ issue. Nevertheless, Vivy leverages social media to quickly mitigate issues and takes effort to personally connect and appreciate her customers.

You don’t need to be an expert to be successful

Unknown to many consumers, the founders of Hermo has little idea about beauty and cosmetic products prior its founding. Similar to FV, the founding of Hermo was inspired by a popular online beauty site in China named Jumei.com. Co-founders PS Chong and Ian Chua entered the scene as sneaker sellers on LowYat.net and discovered a market need where there was lack of beauty products available online.

Screenshot of Hermo in 2013 – History of Ecommerce Malaysia

In 2010, Hermo was founded and today garners about 758k visitors on a monthly basis. When asked in an interview what was the secret to their achievement, they plainly stated Hermo was successful because they try really hard to understand consumers’ needs and work really hard to meet their needs.

Hermo received further validation as their ex-investors Gobi Partners recently received the “Exit of the Year” awards from the Malaysia Venture Capital Association for receiving an IRR (internal rate of return) of 91% during its exit. In May 2017, Hermo was acquired by listed Japanese company iStyle.

The successes of the three ecommerce platforms mentioned above remains the tip of the iceberg as the ecommerce industry in Malaysia is expected to grow exponentially. This is evident as we see a big influx of new local and international players entering Malaysia and Southeast Asia in recent years. Expect to hear more success stories in the years to come.

This is an expert article by iPrice Group