The ratings for the 2019 “Miss America” pageant dropped by 36 percent compared to last year’s record low, setting an all-time low for the beauty competition on ABC.

Going up against the “Sunday Night Football” opener on NBC, the pageant came in fourth place scoring a .7 rating/3 share with 4.3 million viewers tuned in, according to the Wrap Monday. 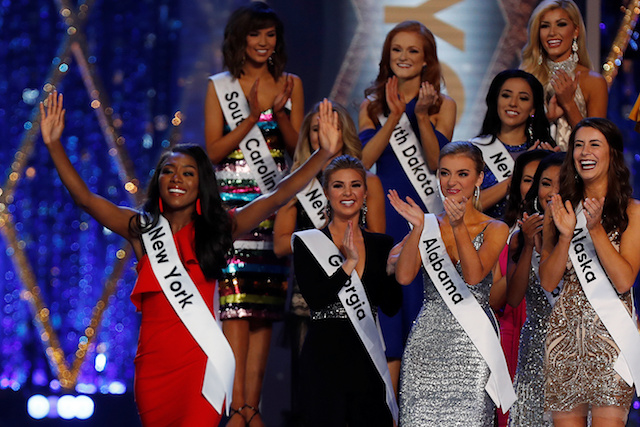 In comparison, the competition last year for the “Miss America 2018”–which also had to go up against the opener for “SNF”–earned a 1.1 rating/4 share with 5.4 million viewers.

In the coveted age demographic of viewers ages 18-49, the competition scored lower than it did when put up against some of the show’s tougher years for the contest when it was only broadcast on cable channels TLC and CMT.

This year’s newly revamped #MeToo friendly version — under the leadership of former Fox News host Gretchen Carlson — saw an end to the 98 years of tradition with the elimination of the swimsuit competition as well as the termination of the “evening gown” round. In addition to those significant changes, politics took center stage with Miss Michigan Emily Sioma, used her introduction time to attack her state’s drinking water problems.

“From a state with 84 percent of the U.S. fresh water, but none for its residents to drink, I’m Miss Michigan, Emily Sioma.”

Nia Franklin, from New York City, walked away with the title and crown for “Miss America 2019.”