The ratings for the opener of NBC’s “Sunday Night Football” dropped in early numbers compared to the openers for the 2016 and 2017 National Football League season.

The showdown at Lambeau Field between the Green Bay Packers and the Chicago Bears ended up scoring the network a 14.4/25 in metered-market results, a drop of 9 percent from the same time last year, according to Deadline Monday. (RELATED: NFL Ratings Continue To Tumble After The Season Opener) 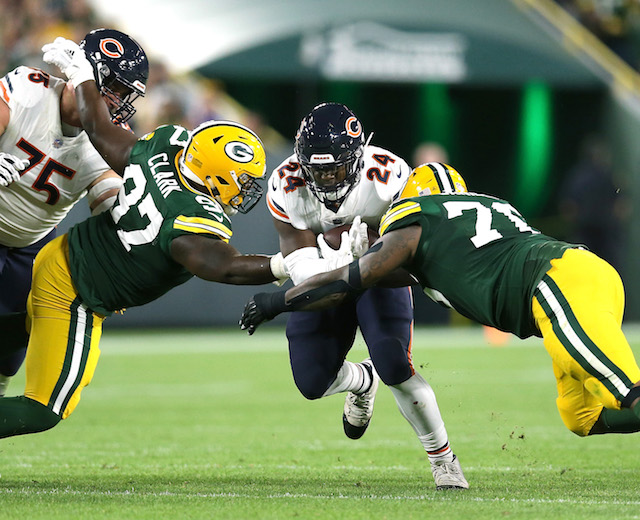 Jordan Howard #24 of the Chicago Bears runs between Kenny Clark #97 of the Green Bay Packers and Mike Daniels #76 during the first quarter of a game at Lambeau Field on September 9, 2018 in Green Bay, Wisconsin. (Photo by Dylan Buell/Getty Images)

At halftime, the Packers were down 0–17 against the Bears with their star QB Aaron Rodgers being wheeled off the field in the second quarter only to come back and lead Green Bay to a 24–23 victory.

Despite all the on-field excitement, the game was down from the 15.8 rating that the opener for Dallas Cowboys 19–3 victory over the New York Giants earned last year, with 24.2 million viewers. Sunday night’s game was also down by 3 percent for the showdown opener in 2016 when the New England Patriots beat the Arizona Cardinals 23–21.

Typically, when the Cowboys play the ratings are higher than in other games. But as the overall league has seen a drop in the ratings so has the Dallas team. For example, in 2016, the average rating for a game was 31.7. But in 2017, the Cowboys only earned an average of 27.9.

There is one bit of good news for the network, though, as the Sunday night numbers for “SNF” showed the best-metered market results the network has experienced for any NBC Sunday game in almost a year.