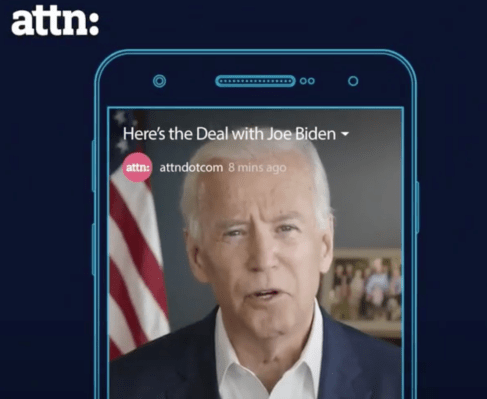 What better way to reach millennial voters ahead of a 2020 presidential run than through Instagram?

Joe Biden, in partnership with ATTN:, will host a 10-episode series streaming on IGTV beginning September 12. In reality, he has yet to confirm a presidential run; the partnership, rather, is meant to help combat digital misinformation in an era of “fake news.”

The show, called “Here’s the Deal,” will air weekly until the midterm elections on November 6. Each episode will hit on big issues, including gun safety, education, infrastructure and healthcare.

“Folks, with less than 100 days until the most consequential election of our lifetimes, we’ve got to keep our eye on the ball,” Biden says in the announcement, adding that the show will not have “complicated, policy-wonk language or acronyms. Just facts — at least as I see them.”

Biden had just come off of an Instagram hiatus when digital media startup ATTN: announced the news. On Saturday, former President Barack Obama posted this nice tribute, welcoming Biden back to Instagram.

In a bid to compete with YouTube, Instagram launched IGTV at the end of June. The new feature lets users upload vertical videos of up to one hour in length.