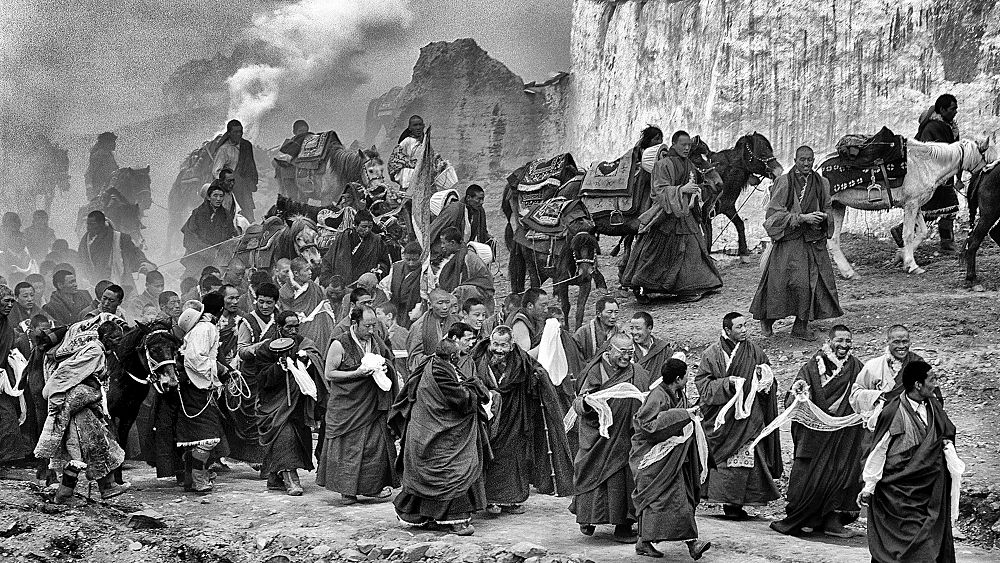 Rencontres d’Arles is one of the biggest photography events in Europe, taking place in Arles in the south of France. Around 125,000 people visit the festival from July through September each year. Euronews has also checked out this year’s 49th edition of the festival and recommends some of the most compelling exhibitions, projects and photographers.

The majority of the exhibitions close on the 23rd of September, so there is still time to visit, but if you can’t make it – we asked the exhibited artists and festival’s director to talk us through their work.

Austrian photographer Gregor Sailor hunts for fake towns around the world. These are so-called “Potemkin villages” – any construction built solely to deceive others into thinking that a situation is better or different than it really is.

The photographer has visited European city replicas in China and spotted a fake elderly woman and a cat in the fake windows of wallpaper-decorated house fronts of Suzdal city ahead of a visit by Russian president Vladimir Putin.

Sailor takes his photographs with an analogue camera. In the focus is usually what seems to be an ordinary town. The window is open, the light is on, the streets might only be empty because of bad weather. It is hard to imagine that some of these buildings were never inhabited and only function as a venue for military training.

Watch our video interview with the photographer to learn more about this project.

Norwegian photographer Jonas Bendiksen has followed seven men in different parts of the world who consider themselves to be the Biblical messiah returned.

Their stories are told in extraordinary pictures, videos and text. Our favourite follows the life of a former MI5 agent, and corruption whistleblower David Shayler who proclaimed himself to be Jesus Christ in 2007. Shayler’s version of Messiah has an alter ego called Dolores Kane, who embodies the feminine aspects of divinity. The ex-secret agent spreads his teaching both in his female and male personae.

On the 60th anniversary of Robert Frank’s book The Americans, when the United States seems to be closing its doors to many, the festival invites you to take a look at the work of foreign photographers in the USA.

Their heritage has become a cultural phenomenon in its own right. The shows of Switzerland’s Frank and France’s Raymond Depardon offer iconic and also some previously unpublished photographs from the artists. The work of British photographer Paul Graham, who chronicled socio-economic divisions across present-day America using often audacious photographic techniques, is also present at Arles this year.

The director of the festival, Sam Stourdze, told us more about these exhibitions and explained how the 49th edition differs from its predecessors.

Olga Kravets, Maria Morina and Oksana Yushko invite us to visit the Chechen capital Grozny. Nine years of work presents nine dimensions of the post-war city and explains its cultural and political dynamic under the rule of Ramzan Kadyrov. The photographs become outspoken witnesses to inequality, human right violations and abuse of power. We talked to all three artists about the project and their experiences in Chechnya.

The exhibition of renowned American artist William Wegman turned out to be the public’s favourite – his famous Weimaraners made everyone in the room smile. Wegman’s dogs dressed as an astronaut, lawyer, farm worker, housewife and … a dog walker are a tribute to the artist’s imagination.

The photographs of the former French molecular genetic scholar and then writer, photographer and Buddhist monk Matthieu Ricard are on show in a newly built 1,000 m2 bamboo pavilion created by Simón Vélez, a prize-winning architect from Colombia. It’s one of the more remote locations from the town centre, but it’s definitely worth the walk!

My story is a story of hope

French fine art photographer Patrick Willocq photographed 41 French people and 23 asylum seekers in a French village. He transformed real people into actors to tell the story of asylum-seekers “parachuted” into the local community. At the exhibition, we spotted one of the subjects who explained how she became involved. Willocq himself took us through the idea of the project and how he brought it to fruition.