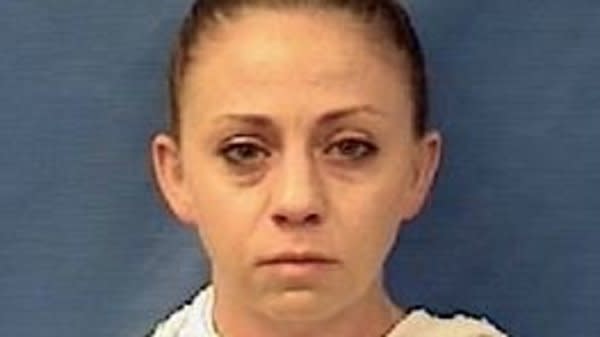 Amber Guyger, the off-duty Dallas police officer charged with manslaughter for shooting a man in his own apartment, claimed she shot and killed 26-year-old Botham Shem Jean after he ignored her “verbal commands.”

Guyger was returning home from a 12-hour shift in uniform when she walked into Jean’s apartment on Thursday night, mistaking it for her own, and shot Jean twice.  According to a Texas Rangers arrest affidavit released Monday, Guyger said she fired her gun after Jean ignored her “verbal commands” and then called 911.

About 150 people marched on Dallas police headquarters Monday night to denounce Jean’s death as well as the recent shooting of Jorge Olguin, who was killed by a security guard earlier this month after a dispute at a family party.

At one point, police officers fired pepper balls into the crowd while other officers on horseback moved to contain the protest. The group blocked traffic in the city, marching from the headquarters to the Dallas Police Association and back before dispersing for the night, according to the Dallas Morning News. Community leaders said they planned to take to the streets once more later this week.

Guyger, who was arrested Sunday on a charge of manslaughter, said that she was able to enter the apartment because the door was slightly ajar and that she initially believed she was in her own apartment. The attorney representing Jean’s family, Lee Merritt, told local TV station CBS 11 there are two witnesses who contradict Guyger’s statement to the Rangers.

According to Merritt, the witnesses said they heard a woman knocking on the door before the shooting and saying, “Let me in.” He said Jean was known to be a “meticulous” person who would not have left his apartment door ajar.

Guyger said in her statement to the Rangers the apartment was completely dark when she fired. It was only after she fired and turned on the lights that she said she realized she entered the wrong apartment, which is on a floor below hers.

Guyger has been released on a $300,000 bond. Dallas County District Attorney Faith Johnson told reporters Monday that the Texas Ranger Division, a separate agency from the Dallas Police Department, is in control of the investigation.

“The Texas Rangers made the decision to issue an arrest warrant for Manslaughter,” Johnson said. “The ultimate decision, in terms of what this charge will be, will be presented to the grand jury.”

Jean was a 2016 graduate of Harding University, a private Christian institution in Arkansas. His mother, Allie Jean, said her son was an associate at PricewaterhouseCoopers in Dallas.