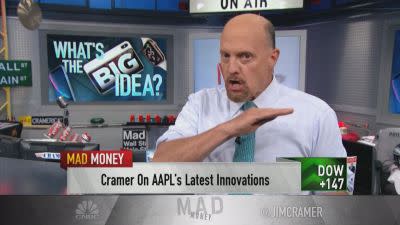 Apple’s AAPL latest model of its Apple Watch , complete with new health features ostensibly targeting the aging population , could be the company’s key to unlocking an even larger customer base, CNBC’s Jim Cramer said Thursday.

“If you get the watch, you’re going to get the phone. That’s the way it works,” the ” Mad Money ” host said. “Consider the watch as the gateway drug to the whole Apple ecosystem.”

Doubling down on his earlier comments that Apple’s newest devices represented a “breakthrough” for the trillion-dollar company, Cramer applauded the iPhone maker’s transformation into more of a subscription business.

He also noted that until the Sept. 12 launch, many investors seemed to be getting “jaded” about Apple’s product reveals because they didn’t seem to move the stock much anymore.

“I know I’ve been far more focused lately on their service revenue stream, as I love a business model where we pay a company every month without even thinking about it because their service is so darn essential,” he said of Apple’s iCloud storage service.

“The service business also eliminates some of the bumpiness caused by the one-and-done nature of buying an iPhone. You buy the razor; you’ve got to keep buying those darned blades,” he added.

But this keynote brought something to the table that Cramer wanted to see for some time: “the real-time health kit” in the Apple Watch Series 4, complete with a heart-rate tracker, an FDA-approved electrocardiogram, a tool that detects a heart condition called Atrial Fibrillation and an emergency feature that detects when you fall down.

In March 2015 , Apple CEO Tim Cook told Cramer that health would likely be “the biggest” next frontier for Apple’s devices.

“For years, people have depended on strictly someone else to determine their health,” Cook said then. “And now these devices — in essence — empower people to manage and track their own health and fitness. And so I think that market is probably significantly underestimated.”

“Apple’s finally giving it to us,” Cramer said on Thursday. “As we get older, these health monitors become necessities. And for the elderly or your elderly parents or your grandparents, you’re now being foolish if you don’t get one of these devices that we just saw yesterday. I think we should get a break on our health insurance premiums if we wear the new Apple Watch. I think your cardiologist will insist on getting it.”

The “Mad Money” host even ventured to say that people “may be downright negligent” if they don’t get the Watch, hence his idea that the device — which integrates seamlessly with the iPhone — would lead people to become full-fledged Apple customers.

It could also lead investors to buy shares in the company on the belief that it can continue to innovate, said Cramer, a longtime Apple bull.

“There are a lot of things that can drive a stock higher, but if you want to know what produces massive multi-year gains, it’s sustained, revolutionary innovation like what Apple just gave you,” he said. “When you look at the new phone and the new watch, you realize that Apple’s trillion-dollar valuation is indeed deserved. In fact, it could be worth a lot more than that if I am right about the revolution that this great company unleashed in yesterday’s product introductions.”