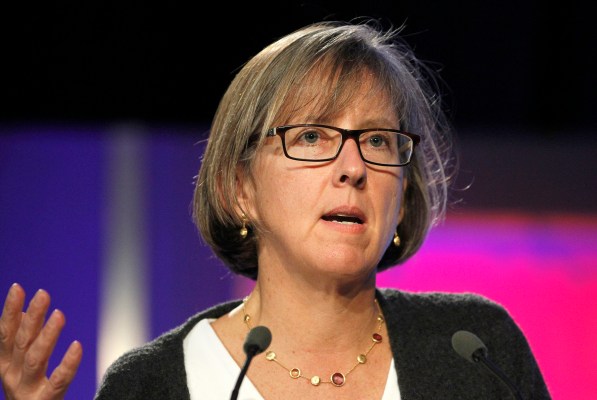 Mary Meeker is leaving Kleiner Perkins to build a new fund and she’s taking the firm’s growth team with her.

The news, first reported by Recode and confirmed to TechCrunch, is the latest high-level departure at one of the most prominent Silicon Valley venture capital firms.

Joining Meeker in her new fund are Kleiner Perkins GPs Mood Rowghani and Noah Knauf, as well as Juliet de Baubigny, a partner. According to the firm, this is less of a messy break-up and more of an amicable and intentional decision to spin-off Kleiner’s growth-investing unit.

“The environment for venture has evolved — with larger checks being written for seed and A rounds and more support from partners required to build companies — demanding a high degree of specialization and extreme focus to excel,” a spokesperson for Kleiner Perkins said in a statement provided to TechCrunch. “The changes in both areas have led to less overlap between venture and growth and creating two separate firms with different people and operations now makes sense.”

A source close to the matter told me the decision was a no-brainer given the success of Kleiner’s growth fund under Meeker’s leadership and her desire to start her own firm.

Meeker, widely known for her annual Internet Trends Report (don’t worry, it’s not going anywhere), joined the firm in 2010 after two decades as a managing director at Morgan Stanley. She was well-established as a tech analyst on Wall Street. In Silicon Valley, she quickly built a reputation as one of the best.

She was one of few women to earn a GP title at Kleiner Perkins in an industry where women have traditionally been shut out from the highest roles in VC. There will be no female GPs at Kleiner in her wake.

A new era at Kleiner Perkins

Founded in 1972, Kleiner has been around to support some of the biggest names in tech. It’s backed Google, Aol and Amazon, and more recently, Slack, Uber and Peloton.

Meeker, Rowghani and Knauf’s departures, as well as several other recent exits, signal a new era at the firm.

Since legendary investor John Doerr stepped down as managing partner in 2016, replaced by Ted Schlein, the firm has been hemorrhaging top talent.

Schlein, however, seems unphased. In an interview with Recode, he said he didn’t think it was a “huge deal.”

The late-stage team at Kleiner “continued to diverge away from what the core part of Kleiner Perkins has done for 46 years, and will continue to do for another 46 years,” he said.

Just last week, longtime Kleiner investor, and the only other female GP, Beth Seidenberg took the wraps off her own fund after announcing in May she would be leaving the firm.

Last year, general partner Mike Abbott left the firm one month after Arielle Zuckerberg, a partner, also exited. The pair was part of a group of seven to leave Kleiner at the time.