Match Group, the dating app giant and parent company to Match, Tinder, OKCupid, Plenty of Fish, and several other dating apps, announced this morning it has invested in and partnered with connected safety platform Noonlight to roll out a series of new safety features to its suite of dating apps. The tools include those for emergency assistance, location tracking, photo verification, and an updated in-app Safety Center.

The Noonlight partnership follows an investigative report by ProPublica and Columbia Journalism Investigations from December 2019, which revealed how Match Group allowed known sexual predators to use its apps. The report also noted that Match Group didn’t have a uniform policy of running background checks on its dating app users, putting the responsibility on users to keep themselves safe.

The company explained at the time that it didn’t screen users of its free dating apps because it didn’t collect enough personal information to do so. But the results of that strategic decision meant that users of Tinder, OKCupid, Plenty of Fish, and Match Group’s other free dating app platforms could encounter sexual predators — including registered sexual offenders, it admitted.

Today, Match Group says it has invested in Noonlight with the intention of rolling out new safety features to its apps, starting with Tinder on January 28, 2020. Tinder, now Match Group’s leading dating app and biggest moneymaker, has been downloaded over 340 million times and has nearly 5.7 million paying subscribers. It was also the top-grossing non-game app of 2019.

The company didn’t disclose the size of its Noonlight investment, but did say it was joining Noonlight’s Board of Directors. Noonlight, which has been operating for five years, today partners with Uber, Lyft, Alexa, Google Home, Fitbit, Canary, SmartThings and others, according to its website. It has handled over 100,000 emergencies to date and runs 3 monitoring centers.

One key addition to Tinder, powered by Noonlight, will allow U.S. users to share details about upcoming dates via Noonlight’s Timeline technology. Tinder users will be able to share who they are meeting, where and when by adding the date to their timeline.

Beyond being a way to combat the reporting about dating app dangers, Match’s interest in this particular safety feature may also have been inspired by its new competition from Facebook. Last fall, the social network launched its Facebook Dating platform in the U.S., which allows daters share their live location with a trusted friend via Messenger.

Another new feature in Tinder will allow users to easily and discreetly trigger emergency services via the Noonlight app, if they’re feeling uneasy or in need of assistance. This is something that ride-sharing apps like Uber and Lyft also offer.

Other updates to Tinder include a new Photo Verification feature for verifying a match’s authenticity; a harassment detection prompt (“Does This Bother You?”), powered by machine learning; and a revamped, in-app Tinder Safety Center. 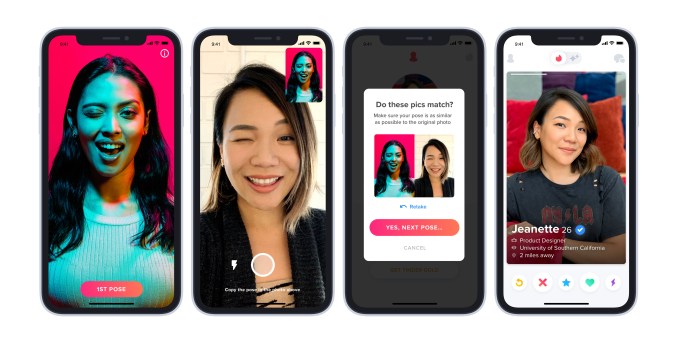 The photo verification feature will allow members to self-authenticate through real-time selfies which are compared to their existing profile photos using a combination of human assistance and A.I. technology. Verified photos will get a blue checkmark to signal they’ve been verified. This feature is now in testing in select markets and will become more widely available in 2020.

Meanwhile, the “Does This Bother You?” prompt will appear when an offensive message has been sent. When a Tinder member responds “Yes,” they will have the option to report the person for their behavior. The technology will also be used to power a new feature called “Undo,” that will ask users if they want to take back a message that contains offensive language before it’s sent. 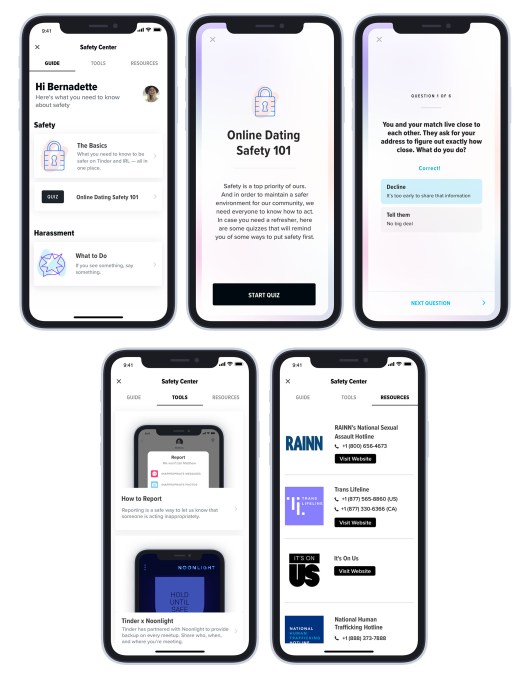 The new Tinder Safety Center, developed in collaboration with the Match Group Advisory Council, has also been updated to be more comprehensive, informing users of new tools and resources. This is launching first in the U.S., U.K., France and Germany, before rolling out to additional markets in 2020. In the future, the Safety Center will also become personalized to the app’s user.

This set of features will also roll out to Match Group’s other dating apps in the months ahead, with Match the next to arrive after Tinder. Match is expected to launch its own new Safety Center, photo verification and a new Date Check-In feature to alert friends and family of their date plans, sometime in 2020. Other Match Group brands will follow.

“A safe and positive dating experience is crucial to our business,” said Match Group CEO Mandy Ginsberg, in a statement about the deal. “We’ve found cutting-edge technology in Noonlight that can deliver real-time emergency services – which doesn’t exist on any other dating product – so that we can empower singles with tools to keep them safer and give them more confidence. Integrating this kind of technology, in addition to the other safety standards that Match Group is implementing across our brands, is a necessary step in dating innovation,” she said.

“We’re proud to partner with Match Group and start our integration with Tinder to provide an enhanced level of protection and comfort throughout the dating experience,” added Noonlight Co-Founder Nick Droege. “Meeting a new person can be an anxiety-inducing event for a myriad of reasons. In working closely with Match Group brands, our goal is to make sure safety isn’t one of those reasons.”