The firm also found that the subscription revenue by these apps accounted for 19% of the total $24 billion in U.S. consumer spend in 2019, across both the Apple App Store and Google Play.

Tinder was the No. top-grossing app of 2019, App Annie’s earlier report said.

Today, Sensor Tower adds that Tinder was also responsible for 10% of the spending in the top 100 apps in 2019, thanks to its monthly recurring subscriptions like Tinder Gold at $14.99 per month and Tinder Plus at $9.99 per month.

Breaking down the consumer spending on subscriptions in the U.S. App Store, specifically, the report found that users spent $3.6 billion in the top 100 subscription apps of 2019, up 16% from the $3.1 billion spent in 2018. YouTube was the top subscription app on the U.S. App Store, followed by Tinder. In 2019, YouTube crossed the $1 billion milestone through in-app spending, including for its ad-free tier, YouTube Premium, which it heavily promotes. On Google Play, however, Tinder was No. 3, behind Pandora and Google One (cloud storage across Google platforms).

Google One’s climb to the top of the charts in 2019 was also a change from past years, where the top charts were dominated by dating and entertainment apps, Sensor Tower noted. 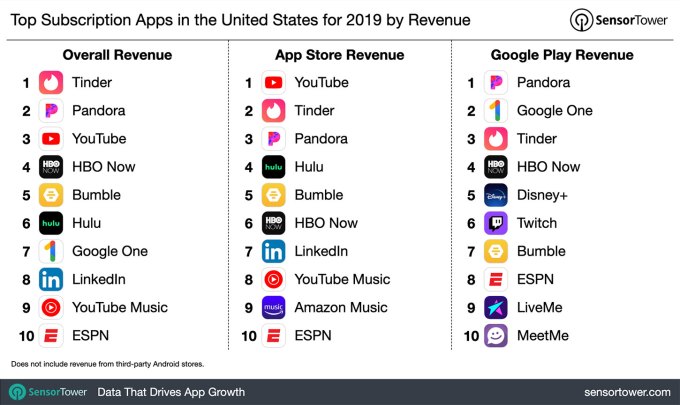 However, the App Store still leads in consumer spending, by comparison with $3.6 billion versus Google Play’s $1.1 billion. 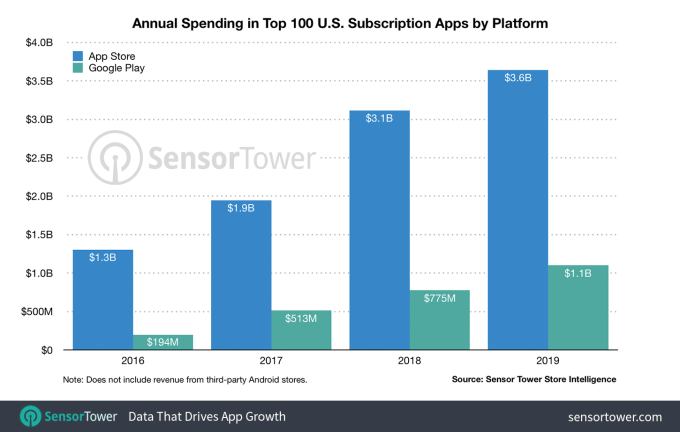 Top apps drive a majority of consumer spending, but the subscription model is benefitting even those apps further down on the charts. For example, the top 10 subscription apps grew by 10% in 2019, but the No. 11 to No. 100 apps grew by 35% in the same period of time.

This trend is expected to continue in 2020 and the years ahead.

This money manager says growth stocks are still your best play, and he has the math to back it up
2020-01-23