Police draw guns on black family, force children to lie face down on the ground during mistaken traffic stop. Now the city says it’s willing to pay for therapy for kids. 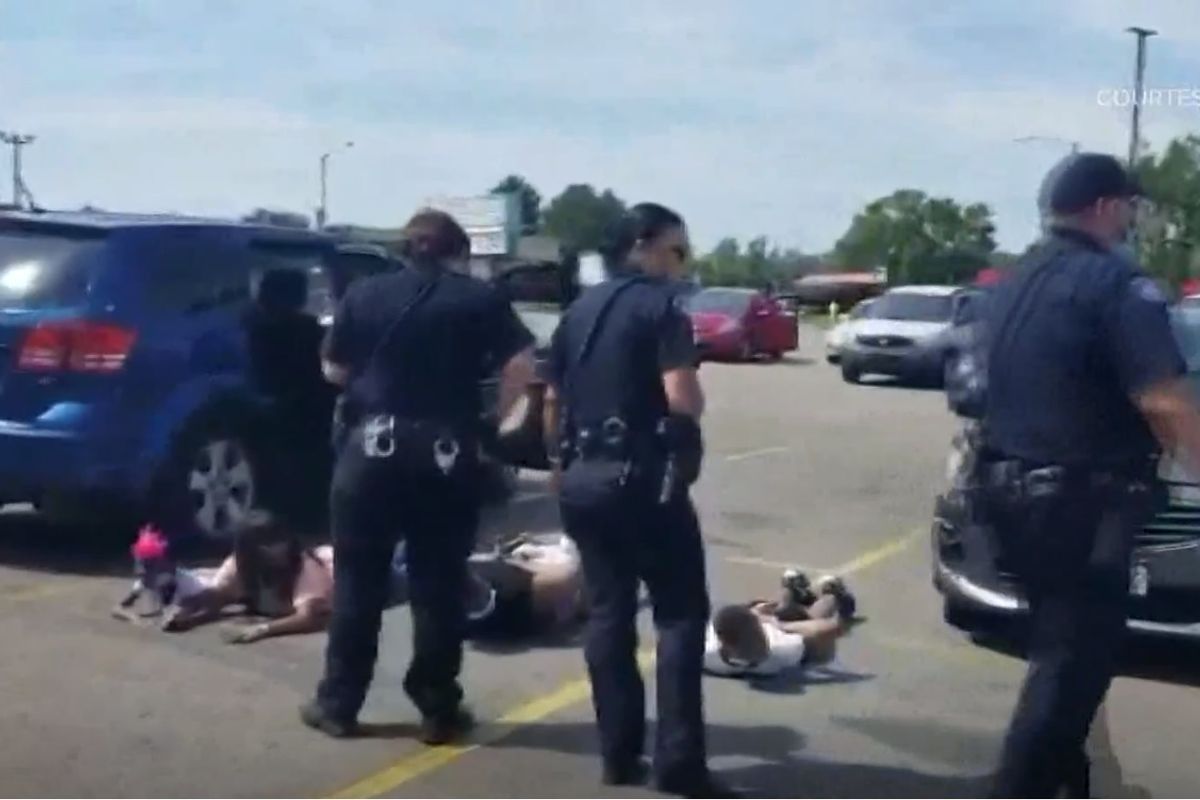 Police have issued an apology after accosting a family with young children in a case of mistaken identity.

The incident took place Sunday morning in Aurora, Colorado, according to
KUSA-TV.

Members of the Gilliam family packed into their family SUV for a trip to a nearby nail salon when police stopped them, believing that the vehicle was stolen.

A spokesperson for the Aurora Police Department said that the vehicle matched the license plate number and a description that they were provided in reference to a stolen vehicle. The vehicle in question had, indeed, been stolen back in February, but it had been recovered and handed back to the Gilliam family a day after being reported stolen.

Police approached the family, which had pulled into a parking lot to see if a nail salon was open, with their guns drawn.

Officers ordered an adult out of the vehicle, and began questioning them, while another officer handcuffed the two older children.

The officer then ordered all four children, ages 6-17, to lie facedown in the parking lot next to the car.

Brittney Gilliam, the driver of the vehicle, told KUSA-TV that she and her daughter, nieces, and younger sister were headed to the salon when they realized it was closed.

Gilliam said that officers approached the vehicle with their weapons drawn, which immediately stoked fear in the family.

“He’s like, something about the car being reported stolen,” she recalled. “And I’m like ‘This happened months ago, you guys cleared it, we got to pick up the car the next day, the very next day, so I’m not understanding what’s going on.”

She added, “There’s no excuse why you didn’t handle it a different type of way. You could have even told [the kids] ‘Step off to the side, let me ask your mom or your auntie a few questions so we can get this cleared up.’ There was different ways to handle it.”

When officers realized the mistake, officers removed handcuffs from the family and issued an apology.

The family, still shaken, demanded to make a complaint over the frightening incident.

The Aurora Police Department is opening an investigation into the incident.

In a statement, the department said, “The Aurora Police Department understands that this is concerning and traumatic for those involved and we again offer our apologies. In a high-risk stop, weapons are drawn, and occupants are told to exit the car and lie prone on the ground. There is not a written policy regarding when/how we use this stop. Officers can use discretion based on the information they have at the time.”

On Monday night, Interim Chief Vanessa Wilson said that the officers are able to deviate from the practice when they see fit.

“We have been training our officers that when they contact a suspected stolen car, they should do what is a called a high-risk stop,” she said. “But we must allow our officers to have discretion and to deviate from this process when different scenarios present themselves. I have already directed my team to look at new practices and training.”

Statement regarding yesterday’s car stop at Iliff and Buckley. https://t.co/rNIJhRjUOu

She also said that she phoned the Gilliam family to personally apologize, and promised that the city would cover the cost of any age-appropriate therapy the children might need in connection with the incident.

David Lane, an attorney, is representing the Gilliam family.