Critics demand Alabama cheerleaders be cut from team after some posed with Confederate flag T-shirt: ‘I love redneck boys’ 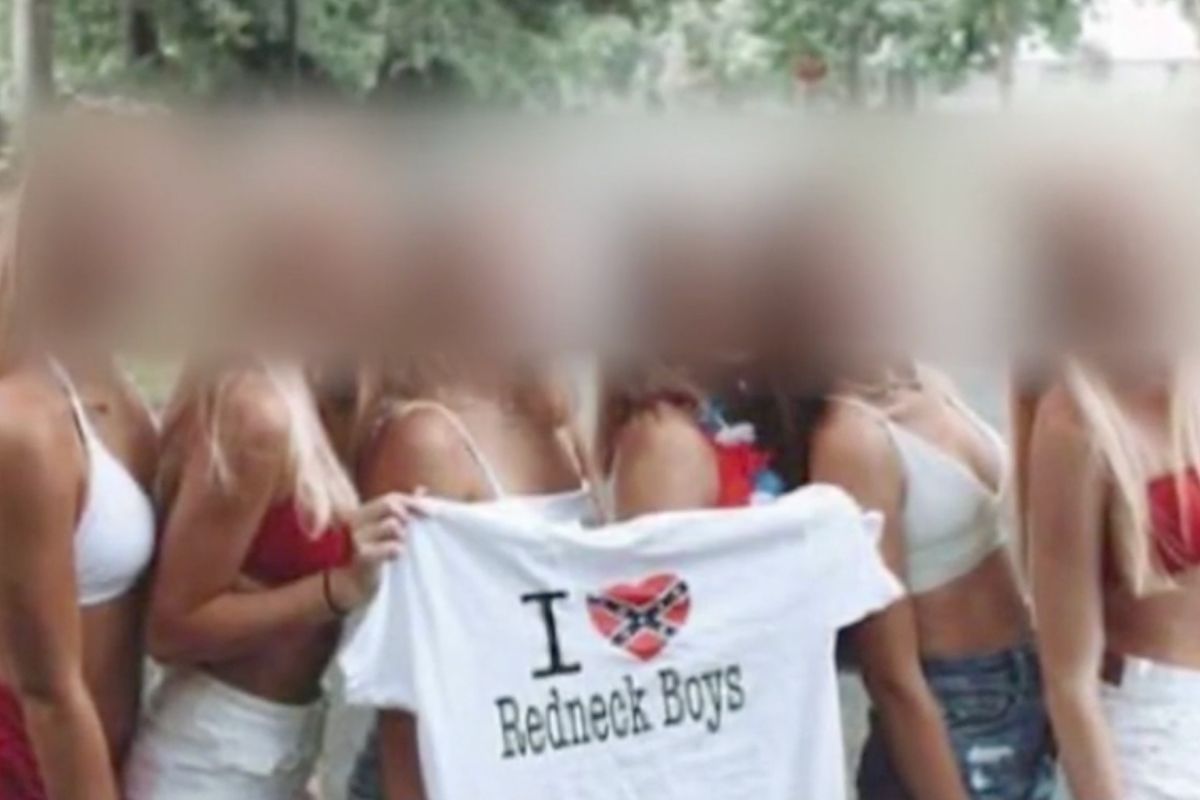 A group of Alabama high school cheerleaders are under fire for posing with a T-shirt that bore a heart resembling the Confederate flag. The T-shirt said, “I love redneck boys,” according to Fox News.

A viral photo shows six white cheerleaders posing with the shirt, which features a red heart with a blue starred “X” across it.

A petition that has reportedly received at least 1,000 signatures is calling for an Alabama public school to sever ties with several of its high school cheerleaders after they posed with the T-shirt.

Reagan Coleman, one black cheerleader for Daphne High School, said she immediately quit after seeing the photo on social media.

Her mother, Latitah, told Fox News that she couldn’t believe the girls had the gall to pose with the shirt .

Reagan said she also spoke out against the T-shirt, and shared sentiments on social media calling out the school’s “negligence” in allowing the rest of the cheerleaders to continue on the team.

“I have since quit the team due to their carelessness and inactivity,” Reagan wrote. “Daphne’s Administration team has failed to release any statements or contact anyone back concerning this matter.”

She insisted that the school has a history of “keeping things like this hidden,” and added “these girls need to face consequences for their actions.”

She also told WVLA-TV that she only saw “hate” when she first spotted the offending shirt.

Latitah, her mother, added, “There’s no two sides to that flag. That means hatred, that’s what it stands for for us. We were oppressed with that flag. They used it when they burned crosses in our ancestors’ yards. When it was railed around on horses. I don’t know what history you’re reading, but if you read the U.S. history, it tells you exactly what that flag stands for and what it means, especially to African Americans.”

Reagan insisted, “I feel like we’re at a time where black voices are being heard. We’re being felt, we’re being seen. So I knew this couldn’t go unheard about. I knew I needed to share this story not for me or how I felt about the picture, but because of the other black children that may be silenced by white administrations like these.”

Her mother said that she received no satisfaction when she broached the topic of the T-shirt with administrators.

“I went from the coach to the principal, from the principal to the superintendent,” Latitah revealed. “And I kept getting vague answers. It was almost like everybody was reading a script.”

The station reports that a petition calling for the cheerleaders’ removal from the team has received nearly 1,000 signatures at the time of this writing.

What has the school said?

A spokesperson for Baldwin County Public Schools said, “We are aware of the situation and it has been handled at the local school level. As with any student issue, federal law prohibits us from discussing disciplinary actions, if any, involving our students.”

“Our system has implemented sensitivity programs and Superintendent Tyler has stressed that we have a zero-tolerance for racism and bullying in our system,” the statement added.