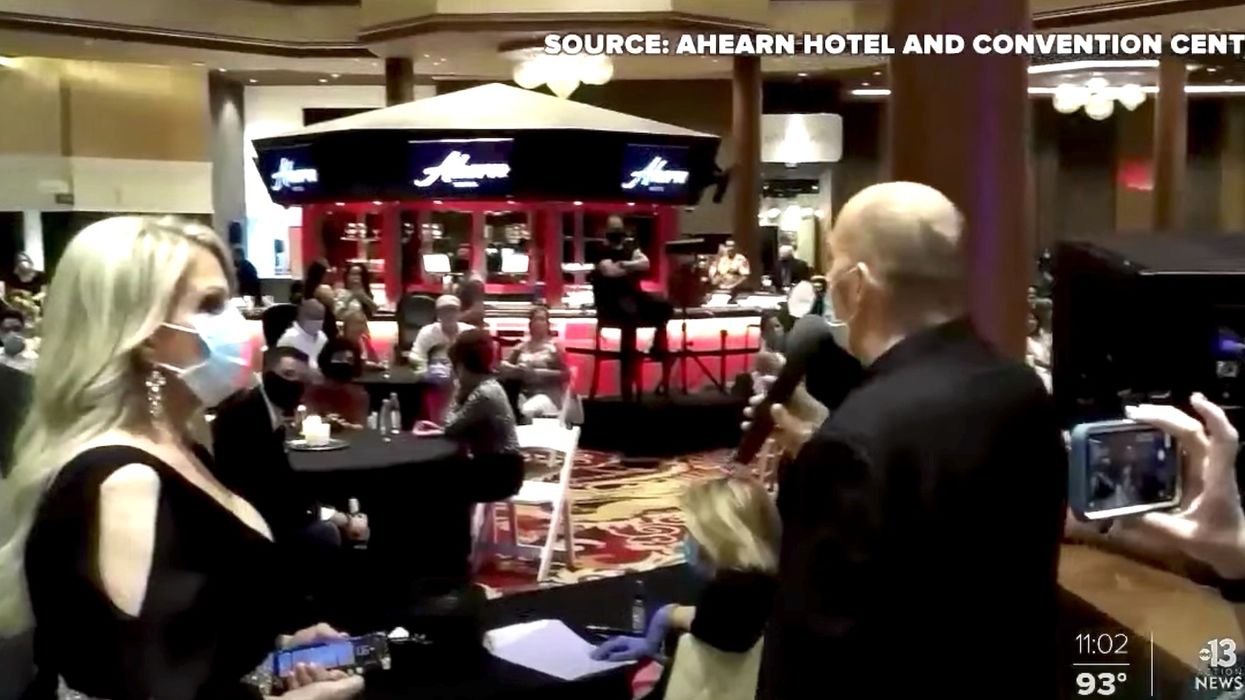 The general manager of a Las Vegas hotel is accusing government officials of shutting down a beauty pageant as “retribution” for hosting a Trump campaign event.

“Our occupancy is 1,605 people and there were less than 200 people present tonight,” said general manager Keith Wright of the Ahern Hotel, according to KSNV-TV.

“The Mayor of Las Vegas spoke at a meeting here for well over 50 people a few weeks ago, and nothing was said at that time,” he added.

A video posted to social media showed the Mrs. Nevada Pageant being shut down to remove attendees by city officials.

“This is not Nazi Germany, OK?” said a man over the loudspeaker as he told spectators that they had to leave the event.

The official social media account of the city of Las Vegas confirmed that the event had been scaled down because it violated the social distancing order from Nevada’s governor.

“The city and @LVMPD found that the Ahern Hotel is in violation of the governor’s safety directives by attempting to hold the Mrs. Nevada Pageant with spectators,” they tweeted.

“Business Licensing accompanied by Metro Police did visit the property tonight and the event was stopped.” they added.

The pageant continued with only the contestants and pageant officials, but with no spectators.

KTNV-TV reported that there were about 200 people at the event. No citations were issued.

Amy Tarkanian, a judge at the pageant, took to Twitter to complain about the action.

“WTF the Mrs Nevada Pageant is being shut down even thought it’s been at 50% capacity,” she tweeted.

WTF the Mrs Nevada Pageant is being shut down even thought it’s been at 50% capacity.

She also claimed that officials were targeting the hotel because of the previous Trump campaign event.

“This is punishment for hosting the evangelicals for Trump event because last nights slap on the wrist made no sense. We crowned our winners but without the originally agreed upon sized audience. Rock it ladies!” she tweeted.

Democratic Nevada Gov. Steve Sisolak had previously condemned the Trump campaign and the Ahern Hotel for holding an “Evangelicals for Trump” campaign even in defiance of his social distancing order.

“I was deeply disheartened and dismayed to see the callous and dangerous behavior displayed last night in Las Vegas at a campaign event for President Trump,” tweeted Sisolak.

I was deeply disheartened and dismayed to see the callous and dangerous behavior displayed last night in Las Vegas… https://t.co/uN7LOje3L5

“I am equally dismayed that the campaign and business defied the State of Nevada emergency directive which limits public gatherings to 50 people or fewer,” he added.

The hotel was fined $250 for hosting the “Evangelicals for Trump” event, which reportedly included more than 500 guests.


Mrs. Nevada Pageant must downsize due to pandemic says City of Las Vegas