As noted earlier, silver is crashing as much as 15% today, a plunge which if it had spread to stocks would prompt a panic at the Fed and an injection of at least several trillion. The fact that precious metals do not need a rescue from the Fed – and in fact anything the Fed does do will only send them higher – is probably worth its own take, but for now we will simply look at how we got here, where we are going and update details on the balance sheets of the Federal Reserve, European Central Bank (ECB), Bank of England (BoE), Bank of Japan (BoJ), Reserve Bank of Australia (RBA), and Bank of Canada (BoC) balance sheets, as well as on the programs implemented by each central bank.

As BofA shows, central bank balance sheet have never been bigger with the Fed now “holding” 34% of US GDP, and expected to see this number rise to 38%. For the other central banks the number is 25% for Canada and 123% for Japan.

Putting an actual number to the liquidity firehose, central banks have injected $24 trillion, or about a quarter of global GDP, into the market to keep it from crashing and expectations are that this number will increase to $28 trillion by the end of next year (this excludes the tens of trillions in assorted liquidity instruments in China). That would be a very optimistic expectation. 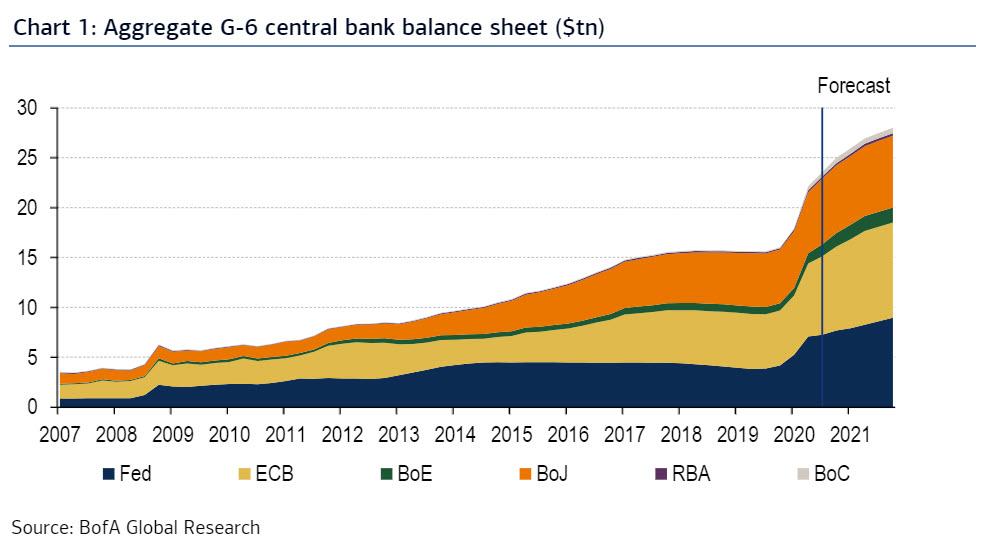 And since these days chart inflation means that one picture is worth a trillion words, we will focus on the visuals as they are self-explanatory.