Over the weekend, Morgan Stanley’s global macro strategist Andrew Sheets published his latest market outlook, which as we noted, boiled down to one thing: investor duration exposure is at all time highs, and it won’t take much of a reflationary trigger to spark a liquidation puke in fixed income securities which would send yields higher and trigger a risk asset selloff even if ultimately the reflationary signal will push beaten up value stocks higher.

As Sheets noted, “this is one reason why my US colleagues have downgraded software from overweight – a sector with very high valuations and interest rate sensitivity. With duration exposure surfacing across portfolios, we like owning interest rate volatility (while we prefer to sell equity volatility). And for central banks, this dynamic should highlight the dangers of overcooking markets that are already doing quite well.”

Looking ahead, the MS strategist was cautious, warning that “the rise in duration across asset classes, at its most expensive levels on record, suggests that the transition won’t be smooth.”

Picking up on this warning, Morgan Stanley’s chief equity strategist Michael Wilson echoes Sheets’ caution, but not before taking a victory lap first, saying that “we have been bullish since late March on the view that a new bull market began with the beginning of the worst recession in modern history. Since then, the bull market has followed the typical script with some of the most cyclical and levered companies showing the best performance. Note the top ten performers in the S&P 500 and S&P 1500…”

“… from the beginning of this new bull market are classic “cyclicals” just as our recession playbook suggested. Furthermore, despite all of the hoopla over the S&P 500, the Russell 2000 has been the better performer.” 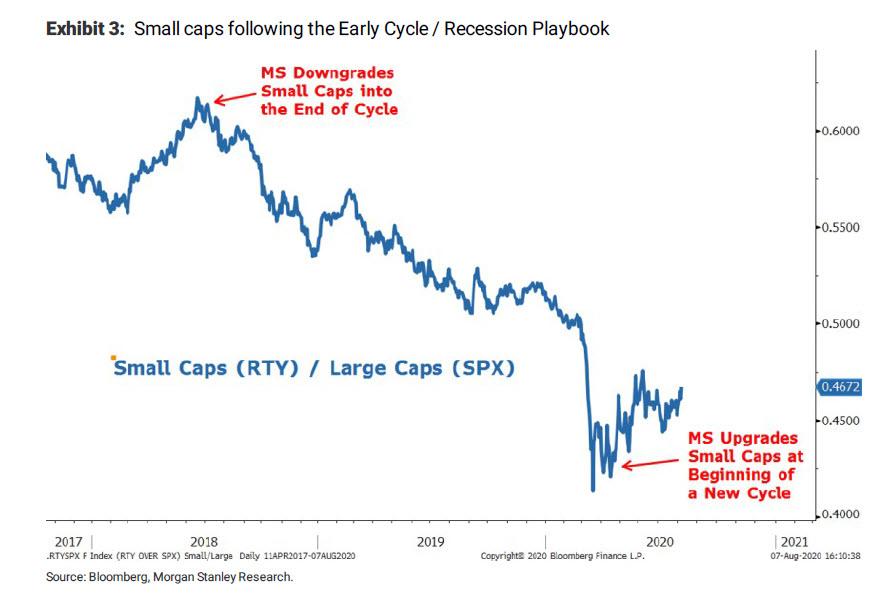 In short, as Wilson concludes “it’s paid to move down the quality and cap curve assuming you did it early on.”

Wilson also notes that much of the relative performance in the classic cyclicals and small caps since the March lows occurred in the first 10 weeks of the recovery:

As we’ve been noting, most stocks have been in a correction/consolidation since June 8th when the equal weighted S&P 500 made its recovery highs (that have yet to be taken out). Many of the weakest stocks since then were some of the biggest winners during the initial rally of this new bull market–i.e. the reopening/recovery winners.

So fast forward to today, when the Morgan Stanley strategist sees a “trio of reasons to worry has the market questioning the recovery” which are behind the post-June 8 “correction” to wit:

It is these concerns that Wilson believes “convinced some investors to pare back on these classic cyclicals and migrate back to the pandemic beneficiaries”, however as Sheets wrote over the weekend, the bank disagrees with that strategy and thinks portfolios need to have a balance of COVID beneficiaries and recovery/reopening winners.

After the recent run of the former, we believe the better relative opportunity at this point is with the latter–i.e. cyclical stocks most levered to the recovery over the next 12 months.

Ultimately, Wilson’s optimistic view is based on 4 key points which are as follows: 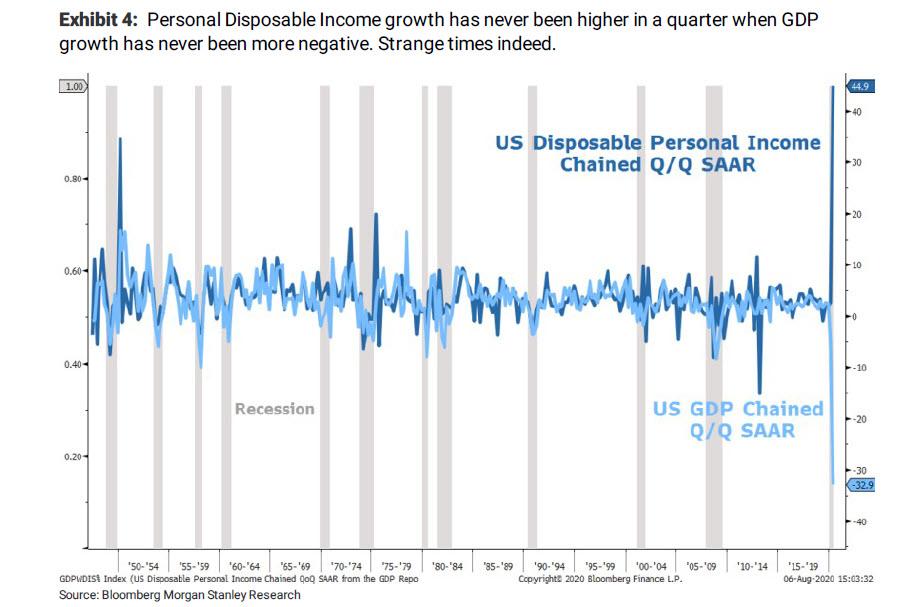 As for the impact on rates, Wilson writes that “given the points above we have high conviction that 10 year Treasury yields are like a coiled spring and are likely to be much higher over the next 3-6 months.“

Wilson also goes back to a point he made a month ago, discussing how the dramatic improvements in corporate operating leverage (read mass layoffs with government stimulus programs picking up the welfare slack), will lead to a surge in corporate profits:

What this really means is that our thesis for a sharp increase in operating leverage is more likely to play out. To recall, at the market trough in March we suggested the government was essentially underwriting this unemployment cycle with its massive Paycheck Protection Program, $1200/$2400 stimulus checks, and supplemental unemployment benefits (Bear Markets End with the Cycle, Time to Employ a Recession Playbook). As with all recessions, companies cut costs aggressively and that includes labor. Usually, cutting employment can have a negative effect on revenues, but this time that may not be the case. Instead, revenues may hold up better than expected as the government subsidizes the unemployed at an even greater level than  normal. The impact to the bottom line will be dramatic for those companies that cut costs the most. We think this is already starting to play out. Indeed, the S&P 500 is simply following the impressive rebound in both PMIs (Exhibit 5) and Earnings Revision Breadth (Exhibit 6) as we expected back in April.

Looking ahead, Wilson’s conclusion is that “hile earnings will likely surprise on the upside next year for the S&P 500, “the surprise will be greatest from the parts of the market that are most levered to the economic recovery. While we think the market has it right directionally, the best opportunities from here are likely to be in those stocks that have higher operational gearing to economic activity and low expectations.“

This may well explain the last two days’ surge in beaten down value stocks at the expense of bond-like tech/growth stocks.

Finally, will Wilson be right and are yields indeed about to soar? We’ll know in “3 to 6 months”, but his track record has so far been impressive: just after the March crash, Wilson raised his 12 month S&P base case target for the S&P to 3,350… and we just took it out about 9 months early.