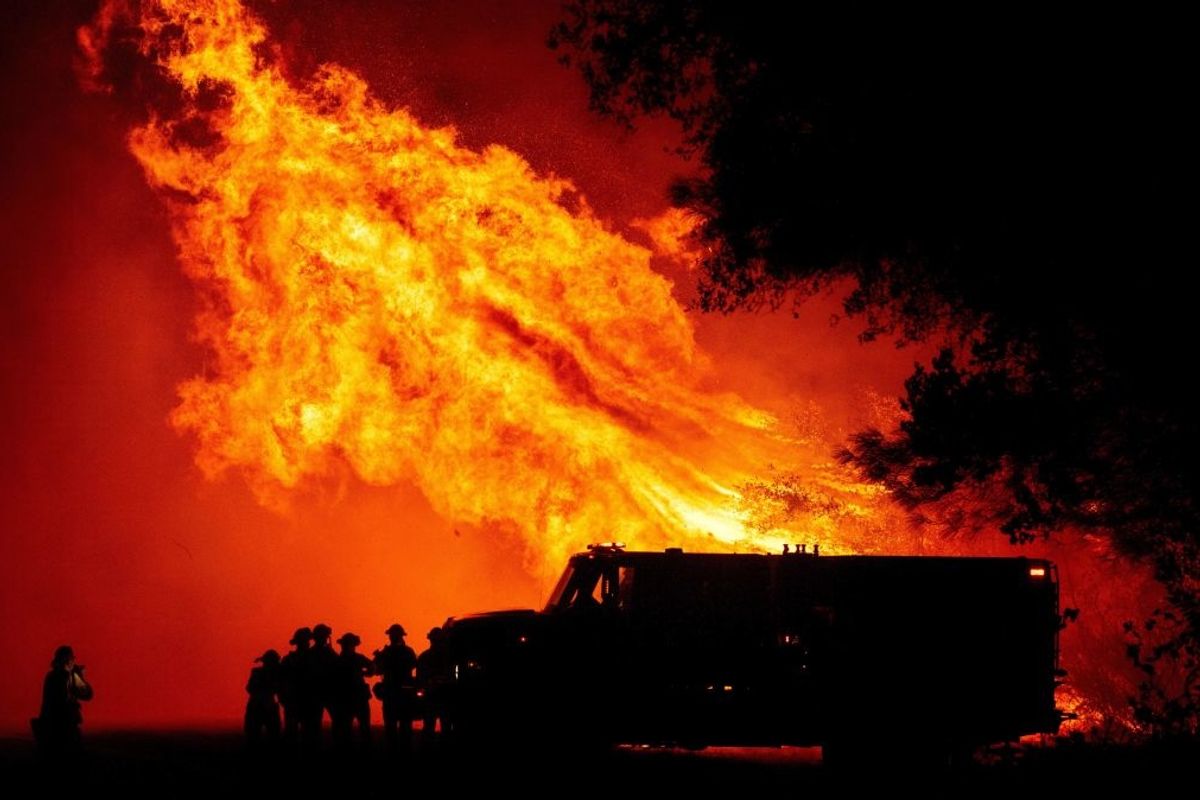 Wildfires have devastated states on the West Coast; at least 29 people have been killed, dozens of others missing, and hundreds of thousands have been forced to evacuate their homes.

The National Interagency Fire Center reports that 97 large fires have burned 4.7 million acres across the western states. Over 29,000 firefighters and support personnel are battling the wildfires, along with 2,200 fire engines and 103 aircraft. There are evacuation orders in place due to 40 large fires in California, Colorado, Idaho, Oregon, Utah, and Washington.

Oregon Governor Kate Brown (D) noted that nearly 900,000 acres had burned by Friday. “In the last 10 years, we see an average of 500,000 acres burn in an entire year. We’ve seen that nearly double in the past three days,” Brown said.

Approximately 500,000 in Oregon have evacuated or have been instructed to be prepared to evacuate, which is more than 10% of the state’s population.

Oregon’s emergency management director, Andrew Phelps, told MSNBC that the state is preparing for a “mass fatality incident” because of the wildfires. “There are going to be a number of fatalities, folks who just couldn’t get warning in time and evacuate their homes and get to safety,” Phelps said.

Wyatt Tofte, a 12-year-old boy from Lyons, Oregon, and his 71-year-old grandmother Peggy Mosso died while trying to escape the fire. The boy took shelter in the family car, but the flames surrounded him. A family spokeswoman said Wyatt was found by himself in a car, and the family’s dog was found dead in his lap.

500,000 residents of northwest Oregon have either evacuated or been told to be ready to go, as those in southern Or… https://t.co/7pgMJhZGiE

All @ORDeptForestry forestland is currently closed to public entry & use, including the Santiam, Tillamook, Clatsop… https://t.co/AyKNYEQLLE

Residents evacuated from Molalla, Oregon, as the sky turned crimson from smoke and cinders as wildfires have contin… https://t.co/wVDnn8xO1k

At least six people have died as wildfires tear through the US west coast.

Dozens of fires have raged across Washi… https://t.co/bDPSntdA6O

A record 3.2 million acres in California have been scorched since last month, and about 4,000 structures have been destroyed. The death toll in California from the wildfires reached 20 on Saturday.

A 16-year-old boy was among those where were killed by the wildfires in California. Josiah Williams died while trying to escape a fast-moving inferno in Berry Creek in Northern California.

“He was alone, terrified, and ran for his life,” the boy’s mother, Jessica Williams, told KOVR reporter Velena Jones. “My son was a good, smart, caring young boy that died alone, and it kills me thinking about what he was going through.”

Cal Fire stated that five of the 20 largest California wildfires in history have occurred in 2020, including the biggest ever, the August Complex Fire. The largest California fire in history is located about a two-hour drive northwest of Sacramento. The August Complex Fire has burned 746,000 acres after merging with other large fires. The blaze is currently 25% contained.

Extreme weather conditions has caused an increase in acreage for the #CreekFire, which has now grown to be the 16th… https://t.co/wcbgYF4hc1

Fires have been blazing across the western U.S. for the past few months. August and September 2020 saw record-setti… https://t.co/Q33Rds5P3m

On Sunday, President Donald Trump announced that he would visit fire-ravaged California. The president will travel to McClellan Park in Sacramento County on Monday to be briefed on the catastrophic wildfires.

“Since mid-August, President Trump and Governor Newsom have spoken by phone and the White House and FEMA have remained in constant contact with State and local officials throughout the response to these natural disasters. The President continues to support those who are battling raging wildfires in a locally-executed, state-managed, and federally-supported emergency response,” Deputy Press Secretary Judd Deere said in a statement.

On Friday, President Trump tweeted about the wildfires obliterating the West Coast.

“THANK YOU to the 28,000+ Firefighters and other First Responders who are battling wildfires across California, Oregon, and Washington,” he wrote. “I have approved 37 Stafford Act Declarations, including Fire Management Grants to support their brave work. We are with them all the way!”

THANK YOU to the 28,000+ Firefighters and other First Responders who are battling wildfires across California, Oreg… https://t.co/JglonEB62E

Authorities have arrested four people for suspected arson in the historic wildfires in California, Oregon, and Washington. Two Oregon men were arrested and accused of looting homes that were forced to evacuate.

Trump admin says COVID-19 vaccine will not be mandatory, will be distributed within 24 hours of FDA approval

Boater rescues man stranded under bridge: 'He was out there all night in just shorts'

Boater rescues man stranded under bridge: 'He was out there all night in just shorts'

Trump admin says COVID-19 vaccine will not be mandatory, will be distributed within 24 hours of FDA approval