Scott Walker nails Kamala Harris after she visits Jacob Blake and says she's 'proud' of him: But will you visit ambushed LA deputies, too?
Skip to content
PoliticalHEDGE

Scott Walker nails Kamala Harris after she visits Jacob Blake and says she’s ‘proud’ of him: But will you visit ambushed LA deputies, too? 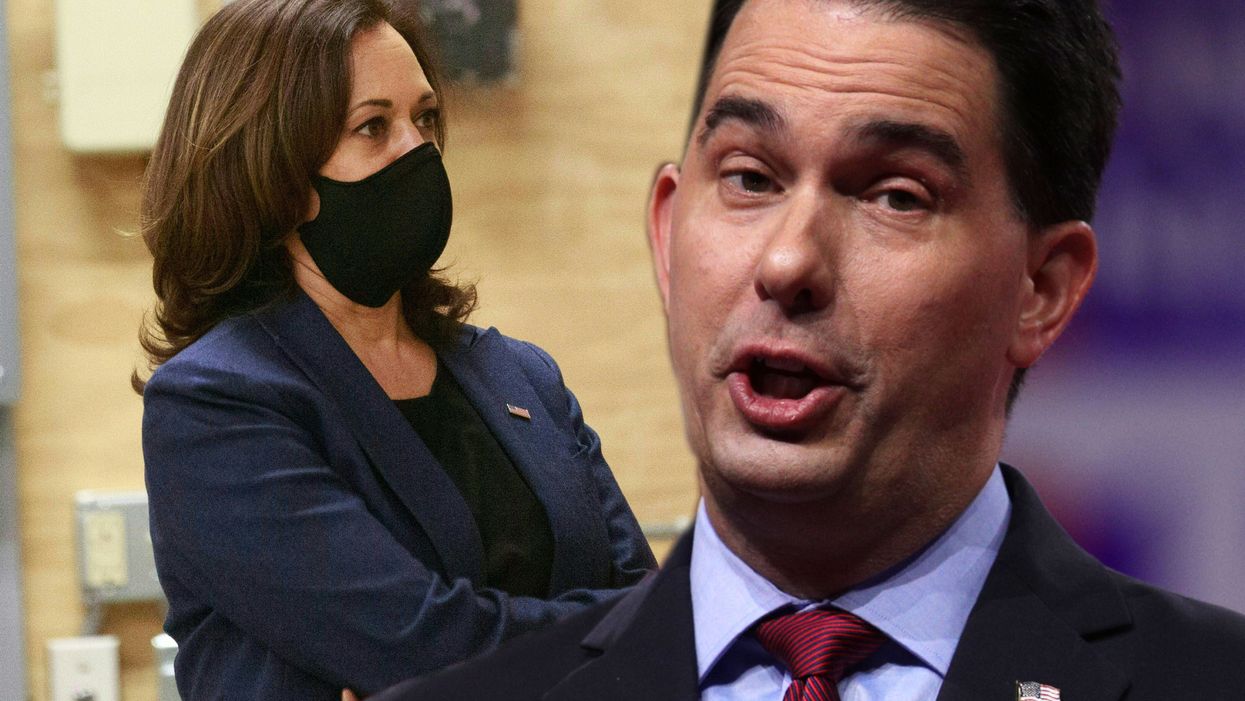 Walker said that it only seemed right that Harris visit the deputies when she took the time out of her busy campaigning schedule to visit Jacob Blake, who was shot seven times in the back by a police officer on Aug. 23 in Kenosha, Wisconsin.

A suspect fired on the deputies in an apparently unprovoked attack as they sat in a police cruiser on a Los Angeles street, authorities say.

Both officers were “severely wounded” during the attack and taken to a nearby hospital for emergency surgery. Though protesters converged on the hospital,
demanding health officials leave the severely wounded officers to die, the two are expected to live.

What did Gov. Walker say, anyway?

On Sunday, Walker wrote, “Will @kamalaharris visit deputies who were shot (31-year-old mom & 24 year-old) in her state? She visited someone in WI who was charged with felony 3rd-degree sexual assault and said she was proud of him.”

“She and @JoeBiden need to side with law enforcement and denounce radicals,” Walker’s tweet closed.

Will @kamalaharris visit deputies who were shot (31-year-old mom & 24 year-old) in her state? She visited someone i… https://t.co/kFYalgfUEd

Do we know anything else about the shooting?

A manhunt is
underway for the suspect who callously fired on the deputies on Saturday.

Officials are offering a $100,000 reward for information on the shooting.

The sheriff’s department describes the suspect as a black man between 28 and 30 years old wearing dark clothing. He was last seen in a dark sedan, authorities say.

So did Harris respond?

Later on Sunday, Harris
wrote, “Doug [Emhoff] and I are keeping the two Los Angeles County Sheriff’s deputies in our hearts as they currently fight for their lives after a horrific attack last night. The perpetrator must be brought to justice.”

Doug and I are keeping the two Los Angeles County Sheriff’s deputies in our hearts as they currently fight for thei… https://t.co/A8HbnxNMjA

What’s this about her visit with Blake?

Harris did visit Blake, and according to Blake’s attorney, Benjamin Crump, the vice presidential nominee
told Blake that she was “proud of him and how he is working through his pain.”

“Sen. Harris has an inspirational and uplifting one-hour visit with Jacob Blake, Jr., and his family today. She spoke individually with each family member about how they were handling the trauma and urged them to take care of their physical and mental health,” a statement from Crump read.

“In a moving moment, Jacob Jr. told Sen. Harris that he was proud of her, and the senator told Jacob that she was also proud of him and how he is working through his pain,” the statement added.

The statement noted that Harris promised Blake that she and Democratic presidential nominee Joe Biden would work to “make things better for all Americans” if they are elected, including the Justice in Policing Act and implicit bias training.

Democratic VP nominee @KamalaHarris spoke to Jacob Blake today, told him she is proud of him. https://t.co/oCLYIcn3RS

What else do we know about Blake and the shooting?

A Kenosha, Wisconsin, police officer
reportedly shot Blake in the back seven times on Aug. 23 during a call responding to a reported domestic dispute.

According to a report from the Kenosha Police Union, Blake confronted officers when they arrived on the scene. He allegedly placed one of the officers in a headlock and was armed with a knife that he reportedly refused to drop.

The Kenosha officer then opened fire on Blake as he attempted to get into his vehicle, where his three children sat.

Kenosha Police Union attorney Brendan Matthews told
WCCO-TV that Blake was reportedly at the residence of his ex-girlfriend, who accused him of a violent sexual assault that reportedly took place in May.

Reports noted that Blake was not permitted to be on the premises, but had shown up anyway in an alleged attempt to steal the woman’s keys and vehicle.

The Wisconsin Department of Justice continues to investigate the incident.

US Services PMI Disappoints In September, “Risk Tilted To Downside In Coming Months”