Update (1340ET): Barely a day goes by, it seems, without Dr. Fauci, Dr. Redfield and other top officials from DHHS/the former White House coronavirus task force, testifying before Congress. Wednesday was no different, with both men testifying before the Senate. Redfield started off by blaming young people between the ages of 18 and 25 for the resurgence in cases over the summer, calling them “major contributors” to the spread of COVID-19.

Later, Redfield was asked by one senator to offer some clarity on the CDC’s abrupt decision to retract recently changed guidance regarding aerosol transmission. He said the document that was posted was a “non-scientifically cleared” document.

However, he’s readying another document that will be scientifically cleared, though Redfield didn’t offer any more insight on that.

With vaccines again the big story of the day after the JNJ news, Dr. Fauci once again told lawmakers that a vaccine will likely be approved by the end of the year.

Circling back the CDC guidance, scientists are battling over whether aerosol transmission – ie spread via tiny particles than can travel over 30 feet from a sneeze or a cough – is the primary cause of COVID-19’s spread. A growing group of scientists are pointing to super spreader events linked to choirs and concerts etc to argue the virus does primarily spread in this way, while surface contact and spread from close interaction are also important vectors, according to the Washington Post.

Some scientists argued that the resistance toward officially classifying the virus as “airborne” is due to “historical bias”.

The number of new COVID-19 cases reported in the US on Tuesday accelerated to 39,345 (compared with +37,417 the prior day), as the post-Labor Day Weekend surge (something that BofA analysts insist is being driven almost entirely by increases in testing) continues. Mirroring the increase in cases, deaths increased by 438, compared with just 270 the day before. California saw cases climb 2,630 yesterday (compared with +3,294 for the prior day), while deaths increased by 53, vs. 31 a day ago.

Meanwhile, the US death toll topped 200,000, a level that was once “unfathomable”, according to the AP.

“It’s completely unfathomable that we reached this point,” said Jennifer Nuzzo, a JHU researcher. The AP also noted that 200,000 deaths from the virus is roughly equivalent to one “9/11” per day for 67 days.

The newswire also noted that the milestone comes “six weeks before an election that is certain to be a referendum in part on President Donald Trump’s handling of the crisis.”

Speaking on CNN, Dr. Fauci said “the idea of 200,000 deaths is really very sobering, in some respects stunning.”  President Trump, meanwhile, said last night that “if we didn’t do it properly and do it right, you’d have 2.5 million deaths”, while Democratic candidate Joe Biden took to twitter to proclaim “it didn’t have to be this bad” (then again, Biden also apparently believes the death toll is 200 million, several orders of magnitude higher than reality). Brazil, which essentially did let its outbreak run wild, is in second place with 137,000 deaths, though some critics believe that number underestimates the true death toll.

Looking ahead, the US is roughly 2 days away from becoming the first country to top 7 million confirmed cases: As of Wednesday morning, the US had 6,897,756 cases, and 200,818 confirmed deaths.

In terms of the big US news on Wednesday, NYC’s health department identified a new cluster of cases yesterday in Brooklyn which it warned could be cause for “significant concern”. the hot spots have been traced to four areas in Queens and Brooklyn.

Speaking Wednesday morning, Mayor de Blasio warned these new ‘hot spots’ require “urgent action” and that NYC will increase enforcement of social distancing rules and also bolster its testing efforts to try and stave off the new outbreak. The mayor also annonced a five-day furlough impacting 9,000 employees – a measure that will reportedly save the city $21 million.

And as we noted earlier, JNJ announced its vaccine candidate would be starting Phase 3 trials, making it the fourth candidate to cross that threshold. Yesterday, UK PM Boris Johnson unveiled new measures to slow a resurgence in the UK’s outbreak. The PM also warned that if the measures aren’t effective, that the UK may return to lockdown, even as a team of BofA analysts warned that tighter COVID restrictions will “scar the UK economy further”.

Finally, the Trump Administration according to Bloomberg is shifting billions of dollars to ‘Operation Warp Speed’, its vaccine effort which relies on throwing money at vaccine projects, and away from testing and masks. The shift shows the administration’s “increasing focus on a medical solution to ease the pandemic,” Bloomberg said. The new money will swell the program to $18 billion from $10 billion.

Here’s a roundup of other important COVID news from Wednesday:

Indonesia sets new daily record: The country reported 4,465 new cases, and another 140 deaths. This is only the fourth time Indonesia has topped 4k daily cases, and each instance has come during the last week (Source: Nikkei).

Tokyo reports 59 cases, marking the lowest daily figure in nearly three months. The number was down from 88 on Tuesday and 98 on Monday, and the lowest since June 30, when 54 cases were reported (Source: Nikkei).

Fujifilm announced that its Avigan drug reduced viral loads and symptoms of COVID-19 patients, clearing the last hurdle to emergency approval in Japan, following months of delays. The Phase 3 clinical study of 156 patients showed that those treated with Avigan improved after 11.9 days, versus 14.7 days for a placebo group (Source: Nikkei).

Japan is finally planning to ease access for foreigners in October, though its restrictions will remain pretty stringent: Only 1,000 visitors will be allowed into Japan per day, and initially only those staying for more than 3 months will be allowed in (and they must quarantine for 2 weeks upon arrival) (Source: Nikkei).

India reported 83,347 cases Wednesday, up from 75,083 on Tuesday, bringing its total to nearly 5.65 million. The death toll has jumped by 1,085 to 90,020. The country’s testing capacity now exceeds 1.2 million per day, by far the highest in the world, and more than 66 million tests have been conducted in total (Source: Nikkei).

Goldman Sachs, HSBC and others have paused plans to return workers in London after PM Johnson appealed to Britons to work from home (Source: Bloomberg).

Argentina reported a record 470 COVID-19 daily deaths, pushing its total to 13,952, according to the government’s evening report. It’s the second day in a row Argentina has reported a record rise in fatalities. Officials also confirmed 12,027 new cases, bringing the total to 652,174 (Source: Bloomberg).

Finally, Goldman Sachs analysts have come up with the following chart to measure the level of COVID-19 restrictions in place in the US. Right now, it’s swinging back toward more restrictions as states move to curb an expected “fall surge” as college students return home. 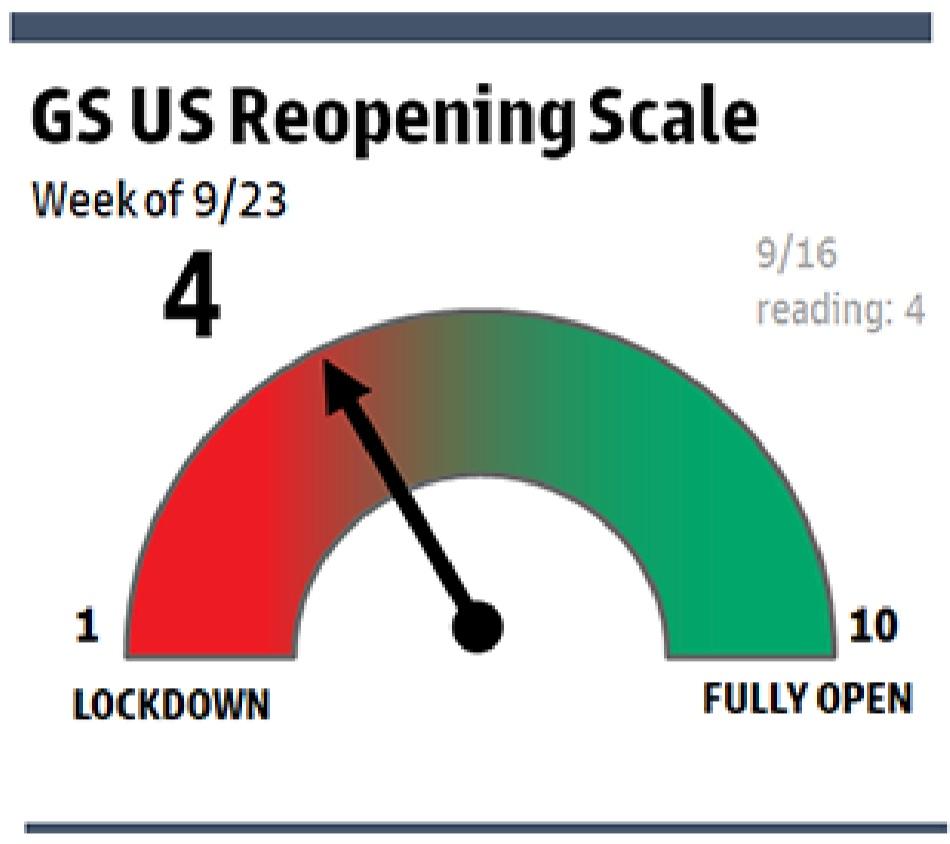 Collapse Is A Process, Not An Event