Man drives through protest in a Prius, gets chased down by cars and attacked by protesters
Skip to content
PoliticalHEDGE

Man drives through protest in a Prius, gets chased down by cars and attacked by protesters 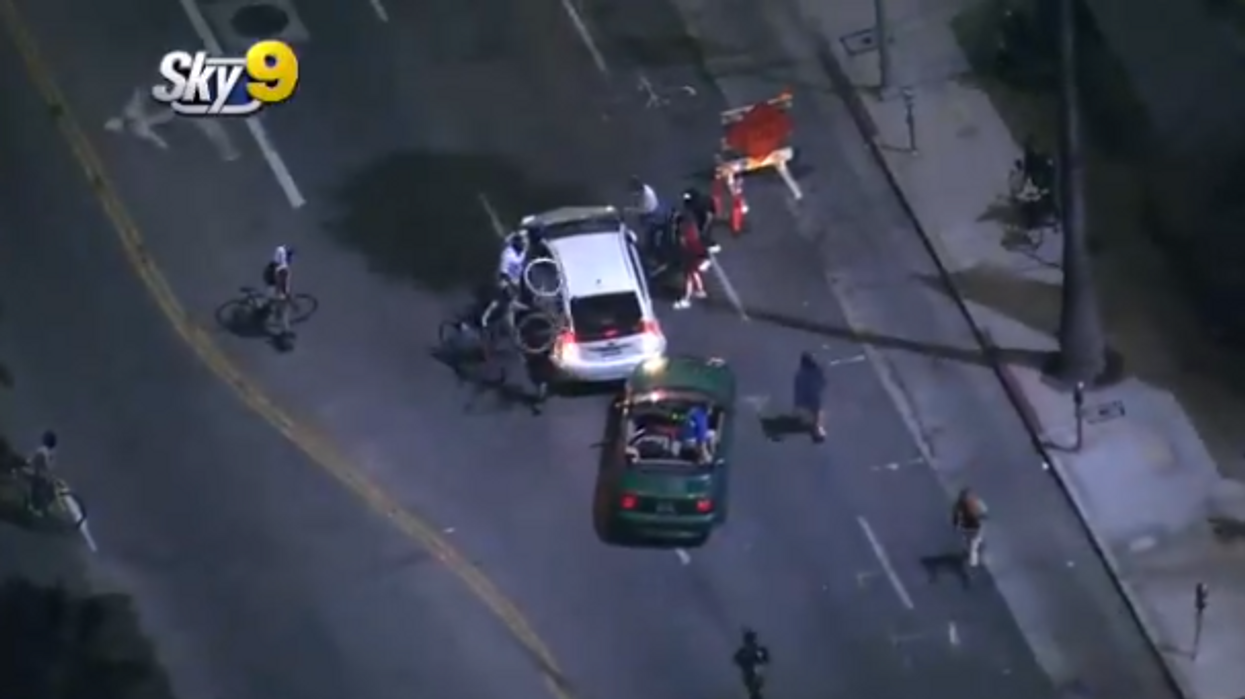 There were protests in Los Angeles on Thursday night following the grand jury’s decision not to indict police officers on homicide charges in the fatal shooting of Breonna Taylor in Louisville, Kentucky. Hundreds of protesters demonstrated in the streets of the Hollywood neighborhood in California, where a wild car chase broke out after a driver attempted to drive through a crowd of people.

Videos on social media show a white Toyota Prius slowly turn down a street at around 9 p.m., despite the intersection being blocked by protesters.

“It wasn’t traveling at a fast speed — it was inching forward, trying to get past, and that upset people,” Christian Monterrosa, a freelance photojournalist who was covering the protest, told the Los Angeles Times.

Demonstrators punch and kick the car as it weaves through the crowd. After the car makes the turn, the protesters pursue the Prius.

A black pickup truck that was involved with the Breonna Taylor protest chased after the Prius. Video taken by KCAL-TV’s helicopter shows the truck accelerating to get in front of the Prius and then stopping in the middle of the road to prevent the Prius from escaping.

The driver of the pickup gets out and attempts to remove the driver from the Prius. Meanwhile, a green Ford Mustang comes up from the rear to try to box in the Prius. The Prius slams into the Mustang.

People gather around the Prius and attempt to open the doors of the car. They attack the vehicle with metal rods, skateboards, and a pole for a “Black Lives Matter” flag, and one person throws a bicycle at the car’s rear window.

The Prius then drives away, but it was detained by police a few blocks away.

MOMENTS AGO: Prius drives through a protest in Hollywood, protestors then chase the vehicle down, smash the windows… https://t.co/yYRv9XrLQ7

WATCH: A person driving a white Prius was chased down and by protesters after trying to drive through the crowd in… https://t.co/Q6g71JnEkT

The LAPD released a statement regarding the Prius incident as well as an earlier situation where a truck hit a protester, causing injury.

“A black pickup truck leading the protests accelerated and pinned that white Prius in, forcing it to come to a stop,” the LAPD said in a statement. “The driver of the Prius attempted to flee the area and reversed into a green Mustang behind it. That vehicle was also participating in the protest.”

“Both the drivers of the pick-up truck and the green Mustang attempted to extract the driver of the Prius from his vehicle,” LAPD said. “However, that driver was able to get away from the scene.”

The police said that there were no injuries from the Prius incident. LAPD added, “All of the drivers involved in both altercations have been identified by Hollywood Officers and the investigation is continuing.”

A police official gave an update on the Prius situation to KNBC reporter Robert Kovacik.

“The white Prius, similarly, was attacked by several protesters who pried his door open and punched him several times while he was inside of his Prius,” the officer said. “He stepped on the gas to try to escape from that attack and may or may not have struck one of the protesters, we have not located a victim yet of that crime if there was one.”

The LAPD is are aware of an incident in Hollywood involving several vehicles and a large group of protestors. Here… https://t.co/nPBRokpxdk

On Friday morning, “Reginald Denny” was a trending topic on Twitter because of the incident. Commenters were making a correlation between the Prius chase and Reginald Denny, a construction truck driver who was yanked from his vehicle and nearly beaten to death after being smashed in the head with a cinder block during the 1992 Los Angeles riots.

On Wednesday night, a car plowed through a crowd of people at a Breonna Taylor protest in Denver. The driver has been detained, according to the Denver Police Department.

‘I am the Democratic Party’: Biden denies Trump claim he wants to get rid of private healthcare