A Maryland man who held multiple large gatherings during lockdowns in violation of Gov. Larry Hogan’s public health order, banning groups over ten or more people, was sentenced to one year in jail, reported WJZ Baltimore. 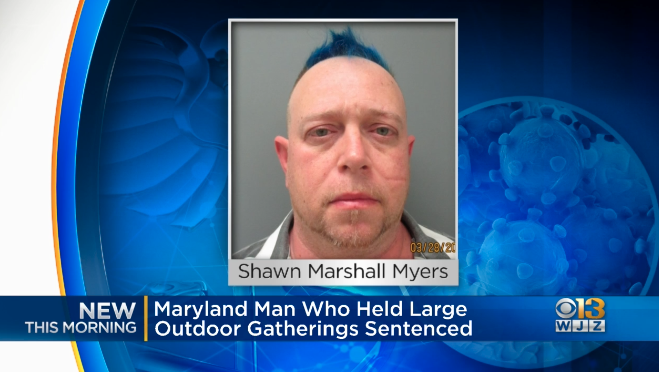 Judge W. Louis Hennessy sentenced Shawn Marshall Myers, 42, of Hughesville, to one year in jail on Friday (Sept. 25) for failure to comply with an emergency order.

Myers threw multiple parties on his property; in some cases, more than 50 attendees were counted by the local law enforcement agency in late March, which was around the time the virus pandemic erupted.

According to the Charles County Sheriff, the first party was held on Mar. 22, had between 50 to 60 people.

“Myers was argumentative with officers but eventually agreed to disband his party,” according to the State’s Attorney.

About one week later, on Mar. 27, officers responded to Myers’ home for a second time, finding more than 50 people partying. At that point, he was arrested.

In addition to a jail sentence, Myers was slapped with a $5,000 fine and ordered to serve up to three years of unsupervised probation upon his release.

Readers may recall Myers wasn’t the only one hosting parties during lockdowns. “Covidiot” millennials threw wild parties as a game to infect each other so they can “get it over with” and get the antibodies.

How Many Of These Questions Will Chris Wallace Ask Joe Biden?

The Most Miserable Place On Earth: Disney Firing 28,000 Workers

How Many Of These Questions Will Chris Wallace Ask Joe Biden?