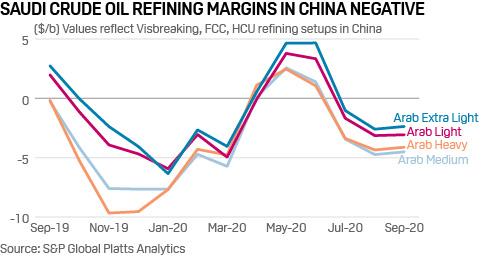 What’s happening? Saudi Arabia’s domestic crude oil stockpiles have climbed to their highest since the coronavirus pandemic hit the market hard in April, with analysts saying Asian refineries are struggling to keep up with term commitments. Saudi crude stockpiles were 78 million barrels as of Sept. 23, the highest since April 26, according to data analytics firm Kpler.

What’s next? Asia’s tepid oil demand may prompt Saudi Aramco to lower its official selling prices for its crude exports. But domestic consumption could see an uptick, as Saudi Arabia has announced it will gradually allow the resumption of the Umrah pilgrimage from Oct. 4.

2. Nord Stream 2: Crawling to the finish 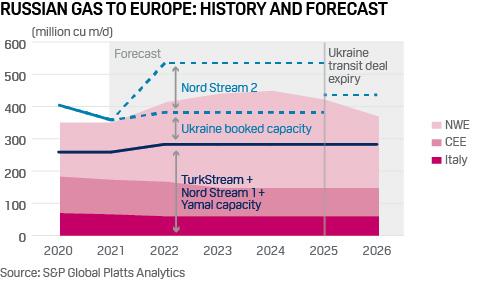 What’s happening? The completion and future operation of the 55 Bcm/year Nord Stream 2 pipeline has turned into a political saga that stretches well beyond its role of transporting gas from Russia to Germany. The threat of extra-territorial sanctions by members of the US Congress against a bevy of participants has left the project stuck at 95% complete since the end of 2019. The pipeline has become intertwined with potential sanctions tied to the poisoning of Russian politician Alexei Navalny, who is currently recovering in Germany.

What’s next? Platts Analytics has recently pushed back the commissioning date by one quarter to the second quarter of 2021. The pipeline delay will not limit Russia’s ability to export gas to Europe, although it may increase the cost to do so. Russia will potentially have to rely more heavily on Ukrainian transit, where its current contract limits its use to 40 Bcm/year. Additional volumes will trigger higher transit fees, which is why Russia will draw on its European storage prior to exceeding its Ukrainian contract volumes in 2021. 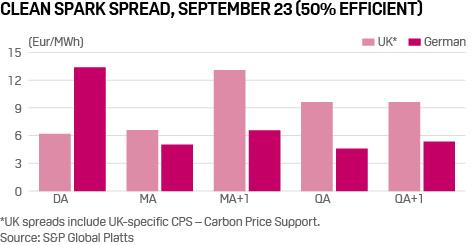 What’s happening? Irish utility ESB has wiped GBP177 million off the book value of its 884 MW Carrington combined cycle gas plant in Manchester, noting poor margins for thermal power stations in the British market for the six months to end-June. Increased renewable generation and reduced demand had served to drive gas plant run times down. British projected thermal margins and captured spreads into the future had also fallen due to reduced demand and lower forecast peak prices, it said.

What’s next? S&P Global Platts calculations show much improved gas plant margins for Q4 in the UK, with CCGTs already running above the five-year average in September. Falling wind output and rising demand added support to gas burn in September, and while winter wind output will inevitably pick up, another delay to reactor returns at Hinkley Point B has reduced Platts forecast for December nuclear availability and offered support to spark spreads. However, let’s not get carried away. ESB’s Carrington predicament remains a decent indicator of thermal plant profitability. Gas plant clean spark spreads at or below Eur9/MWh are still modest levels, barely covering running costs ex-fuel and carbon. 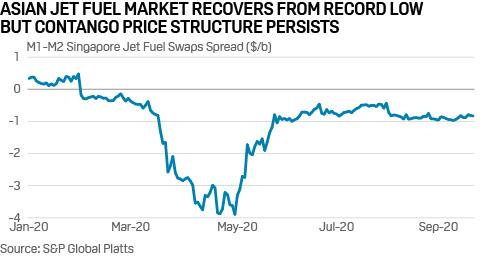 What’s happening? A resurgence of the coronavirus has put a dark cloud over the recovery of the Asian aviation industry, with strict travel curbs still prevalent. India has extended a ban on international commercial flights to Sept. 30, and S&P Global Platts Analytics recently noted domestic flights are currently down 59% from pre-coronavirus levels. Spiraling infections in Myanmar triggered an extension of lockdown measures, forcing domestic airlines to suspend all flights through September. And Philippine president Rodrigo Duterte has announced Manila will remain under strict lockdown until Sept. 30.

What’s next? The industry is poised for further headwinds. The fear of illness is a major deterrent to air travel, with even ultra-low fares unlikely to revive the industry’s sagging fortunes. High infection rates, particularly in countries such as India, could send jet fuel prices into a tailspin once again, sources said. In the derivatives market, the front-month October/November timespread, for example, was assessed at minus 67 cents/b at the Asian close Sept. 23. The front-month timespread has been in a contango structure for most of the year and was last backwardated Jan. 31 at plus 48 cents/b. 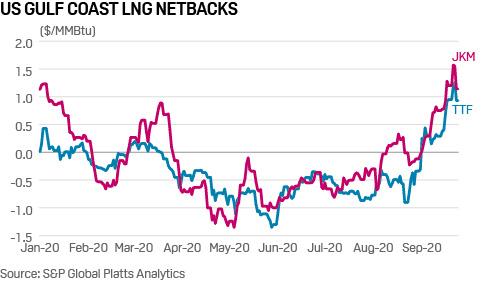 What’s happening? Outages at two US liquefaction terminals – one due to damage to power infrastructure from a hurricane and the other due to planned maintenance — have bolstered LNG spreads. The result has been improved netbacks from European and Asian markets.

What’s next? The trend could drive additional uncontracted export capacity to dispatch as LNG marketers vie for the limited remaining spot trading opportunities before the end of 2020, continuing a recovery from widespread cancellations of US cargoes over the summer.

A change to better commuting behavior

Sen. Cruz predicts if Trump will win the 2020 election

A change to better commuting behavior