Trump says he would 'love' to donate his plasma after bout with COVID-19, declares he's off coronavirus medication
Skip to content
PoliticalHEDGE

Trump says he would 'love' to donate his plasma after bout with COVID-19, declares he's off coronavirus medication 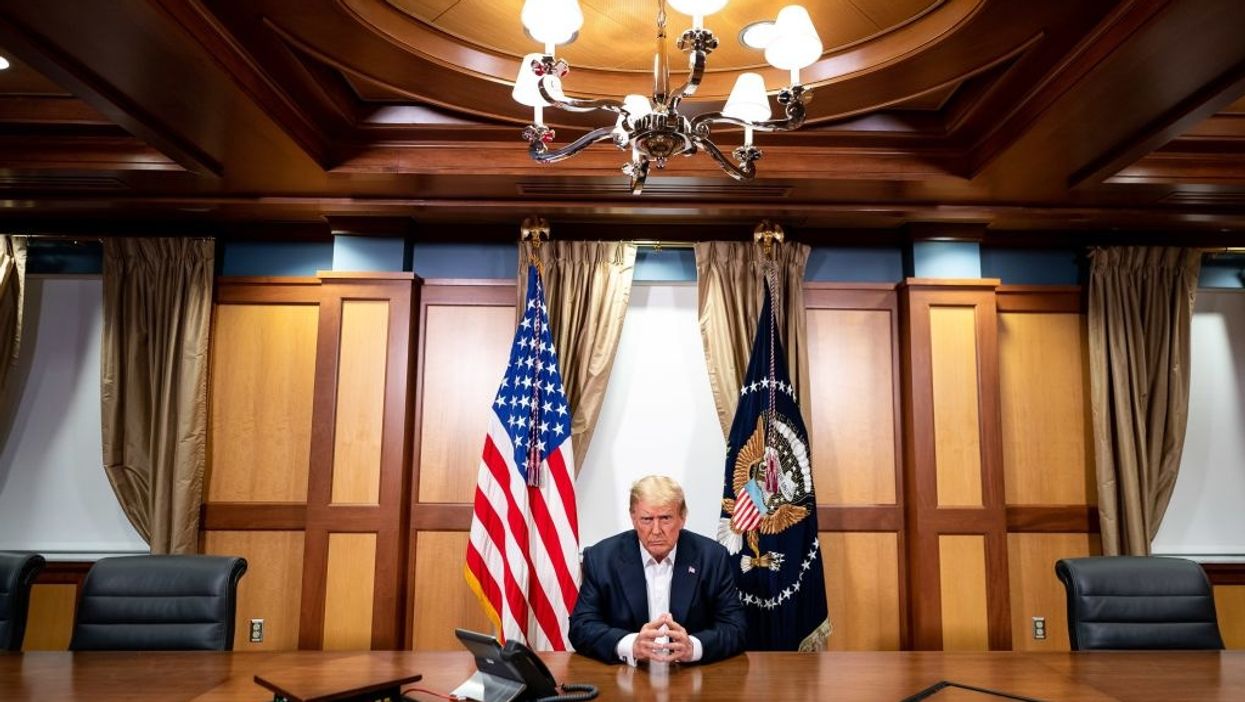 In his first on-camera interview since being diagnosed with COVID-19, President Donald Trump proclaimed that he is no longer taking coronavirus medication. Trump divulged details about his battle with COVID-19 during an interview and “medical evaluation” with Dr. Marc Siegel, a medical contributor to Fox News and associate professor of medicine at New York University since 1988.

During Siegel’s interview with the president that aired on Friday’s episode of “Tucker Carlson Tonight,” Trump gave an update on his health and said he is off coronavirus medication.

Siegel first asked Trump how he feels. “I feel really good. I feel very strong,” Trump replied. “I know a lot of people that have had the COVID or the China virus as I call it because it came from China. But I feel really, really strong and a lot of people don’t feel that way sometimes for awhile afterwards but are very good.”

DR. SIEGEL: “How are you feeling now?”

Trump said he had either beat COVID-19 or the respiratory disease is in remission. “I haven’t found out numbers or anything yet, but I have been retested and I know that I am at either of the bottom of the scale or free,” Trump said

“Right now, I am medication free,” Trump said during the interview. “I’m not taking any medications as of probably eight hours ago. I’m medication free which, frankly, makes me feel good. I don’t like medication.”

“We pretty much finished and now we’ll see how things go,” Trump continued. “Pretty much nothing. We’ve had our final doses of just about everything.”

Trump praised the experimental coronavirus antibody treatment manufactured by Regeneron Pharmaceuticals, which he was given while he was hospitalized at Walter Reed Medical Center.

“Actually, the original transfusion, that’s supposed to last for about four months, you know that?” Trump said. “The antibodies? And I think you’re supposed to be protected anywhere from two to four months and maybe longer than that, I don’t know.”

“They tested the lungs … with different machinery … and it tested good,” Trump explained. “Initially, I think they had some congestion in there, but ultimately it tested good, and with each day it got better, and I think that’s why they wanted me to stay frankly.”

Siegel asked the president how he thought he contracted coronavirus, Trump answered, “I don’t know. They had some big events at the White House and perhaps there.”

Trump told Siegel that he would “love” to donate his convalescent plasma to help other COVID-19 patients.

When asked by Siegel if he would donate his plasma, Trump responded, “I will. Nobody’s asked me that question, actually, but I will. If that’s if they want me to do it, I’d love to do it.”

“Convalescent refers to anyone recovering from a disease. Plasma is the yellow, liquid part of blood that contains antibodies. Antibodies are proteins made by the body in response to infections. Convalescent plasma from patients who have already recovered from coronavirus disease 2019 (COVID-19) may contain antibodies against COVID-19. Giving this convalescent plasma to hospitalized people currently fighting COVID-19 may help them recover.”

In August, the FDA issued an emergency use authorization for “investigational convalescent plasma for the treatment of COVID-19 in hospitalized patients as part of the agency’s ongoing efforts to fight COVID-19.”

President Trump will hold an in-person event at the White House on Saturday, then return to the campaign trail with a rally in Florida on Monday, his first campaign event since he was hospitalized at Walter Reed National Military Medical Center to treat the virus.