As we first discussed over a month ago, with a likely unprecedented volume of mail-in ballots, prospects for volatility enduring post-election day have rarely been higher, and is in fact higher today than a month ago when concerns about post-election vol initially spiked. 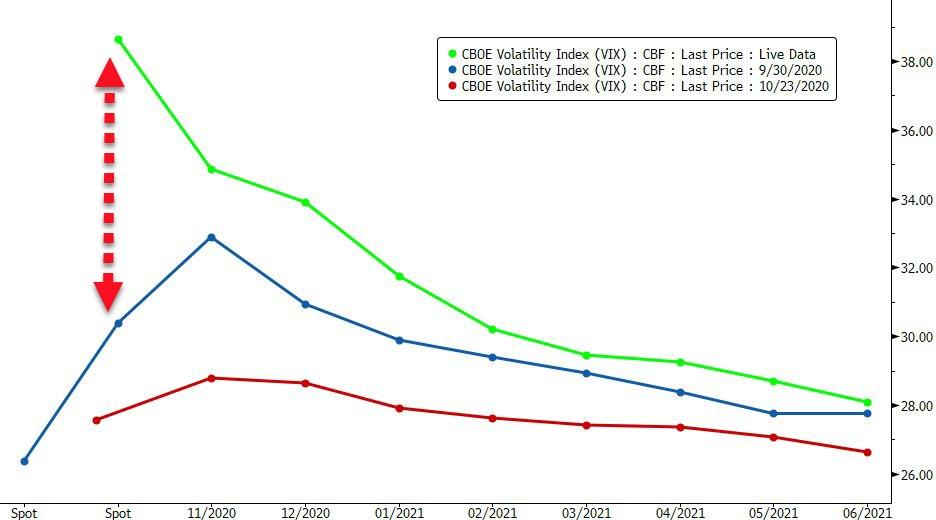 To be sure, back in July we reported that  according to Goldman’s David Kostin, the biggest concerns expressed by its clients is that a contested election could drag on, resulting in little clarity for weeks if not months, in a rerun of the contested 2000 election between Al Gore and George W. Bush, when it took a Supreme Court challenge and 34 days for the winner to be decided. This is what Goldman said then:

Health concerns and social distancing protocols suggest that more voters than ever will decide not to cast ballots at traditional polling stations on Election Day and instead vote by mail. In the case of a close election, it will take time to count – and invariably re-count – all the absentee and mail-in ballots. The deadline for each state to certify its result and finalize electors is December 8th (35 days after the election) or six days before the Electoral College convenes on December 14th (first Monday after the second Wednesday in December).

Echoing this, in early September, Deutsche Bank strategist Parag Thatte wrote that the pricing of VIX futures with November and December expiries are likely too sanguine that there will be a quick and clear outcome of the elections. In fact, if indeed the election won’t be resolved until mid-December (at the earliest), the kink needs to move by at least 2 months, presenting a major arbitrage opportunity. In retrospect, he was right.

Then on Sept 14, JPM’s chief equity strategist Misla Matejka joined this chorus of warnings about a contested election result, which he saw as the “worst-case scenario” for the market (Matejka also said it as the top risk for market performance into the year-end), adding that potential legislative paralysis could be “even more damaging” than Bush vs Gore for economy, as key stimulus measures to support economy might be delayed at a time when a fiscal stimulus deal already seems unlikely before the election.

And while early October experienced a brief period of inexplicable optimism that the election would be resolved quickly and painlessly (bizarre because if Trump does lose, it’s amazing that anyone thinks he would leave quietly and without a SCOTUS fight), fears – and in some cases outright panic – that a contested outcome after the election is once again the base case, have stormed back to center stage, only unlike 6 weeks ago when there was still some hope that a fiscal stimulus could get passed before the election, the most immediate concern now is that a delay in declaring a new president would also mean a delay in delivering more much needed pandemic aid. That, as Bloomberg writes and as the market action today confirms, will “disappoint investors who’ve been counting on additional stimulus in the wake of the election, regardless of who wins, to help the economy recover from its coronavirus-induced malaise. It would also let down those betting a Democratic sweep of both the White House and Congress will release a torrent of government spending.”

And as fears about a contested election soar, so does the hyperbolic rhetoric, and according to Daniel Ahn, BNP Paribas chief U.S. economist, there is a “terrifying risk” that an unresolved election could put investors in “completely uncharted territory.” Speaking to Bloomberg, Ahn said that “if there is a constitutional crisis, we believe that the loss of political credibility and standing of the United States as a stable country could threaten its status as a safe haven with unfathomable consequences for the economy and for markets.”

Which, of course, is nothing new and is precisely why Goldman’s clients were freaking out about a contested election all the way back in July, but the market’s soothing upward levitation successfully masked those fears… until this week when the plunge in stocks once again exposed all the terrors floating just below the surface.

And while some on Wall Street are hoping for the best and buying VIX puts – with put open interest now exceeding calls – on expectations that VIX will collapse after Nov 3, others are far less sanguine, such as Stefanie Miller, managing director at FiscalNote Markets, who said that an outcome that isn’t immediately known is both “severely underappreciated” and the most likely scenario.

“The Trump team has made it very clear that they intend to pursue as many legal avenues as possible to right the fraud they see inherent in the current system of mail-in/drop-off ballot casting,” Miller told Bloomberg, noting that this makes it very clear that it’s reasonable to anticipate delays if hundreds of thousands of ballots are in question.

Miller also said that without a clear winner, it would be very difficult to advance stimulus legislation through Congress during the weeks after the election (even assuming a Blue Sweep), which would coincide with the holiday season, jeopardizing a bounce in consumer spending and crippling the all important holiday spending season.

In short, Miller believes stocks could drop in all sectors as investors aren’t accounting for that.

So what kind of a drop are we talking? According to a Thursday note from Bank of America’s Michelle Meyer and Savita Subramanian, stocks could slide as much as 20% if there’s a contested election. This means that as soon as Wednesday once it emerges if the election will not have a clear winner, we could see a bear market.

The flipside, of course, is that “if markets sell off violently and the economic data deteriorate, we could see Washington facilitate the passage of stimulus even in a highly contentious environment.“

Others are similarly concerned (and likely selling now when they can, not when they have to): Brian Gardner, chief political strategist at Stifel Nicolaus last week cautioned that markets may not be taking into account a closer-than-expected election and outlined a range of market reactions if what he referred to as “chaos” were to prevail in the wake of the Nov. 3 vote.

He assigned a low-alert level if there’s a delay of a day or two, with a more serious alert level if in the event of something like what happened after 2000’s contest between George W. Bush and Al Gore. His risk escalated all the way to the off chance that Congress would decide the election amid widespread riots and civil unrest.

Wells Fargo analyst Mike Mayo chimed in too, warning that “markets may be in for a very choppy ride on Nov. 4 and possibly for much longer if it becomes clear that the election will be contested” adding that a disputed election could hurt bank stocks more than others, based on the three weeks after the disputed 2000 election, when banks shed 10% versus the broader market’s 5% drop, Mayo said.

Yet not everything will be a loser: some financial stocks would clearly benefit from volatility, mostly exchanges such as the Intercontinental Exchange Inc. and MarketAxess Holdings according to Frederick Cannon, global director of research at Keefe, Bruyette & Woods.

One ominous beneficiary would be cryptos as a contested election would usher in a period of extended volatility and might rattle people’s faith in government and fiat currencies, Cannon said in recent interview phone interview. “A loss of trust is good for gold and crypto,” Cannon said, although it we indeed have a bear market in a few days, the wholesale liquidation that follows will likely mean that everything is sold, as babies are thrown out not only with the bathwater but the bathtub itself.

Manish Mehta: Le’Veon Bell will have a chance to exact revenge against Adam Gase