The Great Financial Crisis vs. COVID-19: The Impact On Commercial Real Estate & CMBS

The Great Financial Crisis vs. COVID-19: The Impact On Commercial Real Estate & CMBS

With the devastating impact and lessons learned from the 2007-2009 economic downturn still fresh on the minds of Wall Street, the current COVID market crisis has drawn a fair amount of comparisons to the Great Financial Crisis (GFC). While most had expected the pandemic to serve more as a temporary, short-term disruptor to global economies, it soon became apparent that a sudden global health crisis would leave its mark in a way that differs from anything else we have experienced in recent memory – that it would have the potential to not only have long-lasting physical effects, but also a deeply rooted social and psychological one.

With uncertainty being the name of the game in our current world, policymakers are left to navigate uncharted waters with no benchmark or other handbook on how to weather the coronavirus market crisis.

In this report, Trepp examines how the commercial real estate (CRE) and commercial mortgage-backed securities (CMBS) sectors were impacted by the GFC in terms of delinquencies, spreads, losses, cumulative appraisal reduction amounts (ARA), and new structural and regulatory enhancements, and how market conditions at the time compare to the current crisis caused by the coronavirus pandemic.

The major difference between the GFC and the current economic recession triggered by the COVID-19 pandemic has to with its origins. The previous financial fallout of 2007 was caused by endogenous market factors that resulted from excessive risk-taking by financial institutions in an increasingly deregulated macroeconomic backdrop, a byproduct of banks seeking easy profits which ultimately led to the proliferation of subprime lending, overleveraging, and other performance weaknesses. The current market downturn, by contrast, was prompted by an unexpected shock that came from outside the financial system during a time of economic prosperity, more stringent regulations, as well as stronger underlying credit and risk conservativeness.

CMBS Market Distress – What Time Frame Are We Looking At?

For the CRE and CMBS sectors, the COVID crisis has had a broad-ranging disturbance, with the effects rippling into the way we engage with others in social settings, how we work and interact with coworkers, how we travel, to how we shop and buy groceries. Consequently, this has accelerated existing CRE trends that have been taking some time to take form in an increasingly digitalized world, such as the shift away from brick-and-mortar retail spurred  by ecommerce growth, while also reversing other industry trends (at least in the near-term), including a flight to less densely populated suburban areas. This has forced property owners to repurpose or find creative uses for space in malls and hotels that are expected to remain vacant for some time in order to adapt to a changing and unpredictable industry landscape.

During the GFC, the distress took a notably longer time to play out as CMBS delinquencies and special servicing rates didn’t reach their peak of 10.34% and 13.36% until mid-2012, several years after the start of the turmoil in 2008. Multifamily and lodging were the two most troubled asset classes, with delinquency rates for those two property types peaking at 16.93% (20.07% peak for special servicing) and 19.46% (25.59%), respectively, between the second half of 2010 and first half 2011. Apart from retail, overall delinquencies for each of the major five property sectors were elevated in the double-digits until early 2013. Since the economy was still churning despite a slowdown in activity, borrowers held onto troubled properties for much longer before finally coming to the decision to give up ownership. On the same token, the eventual economic rebound and job recovery process that
followed similarly took years to unfold. 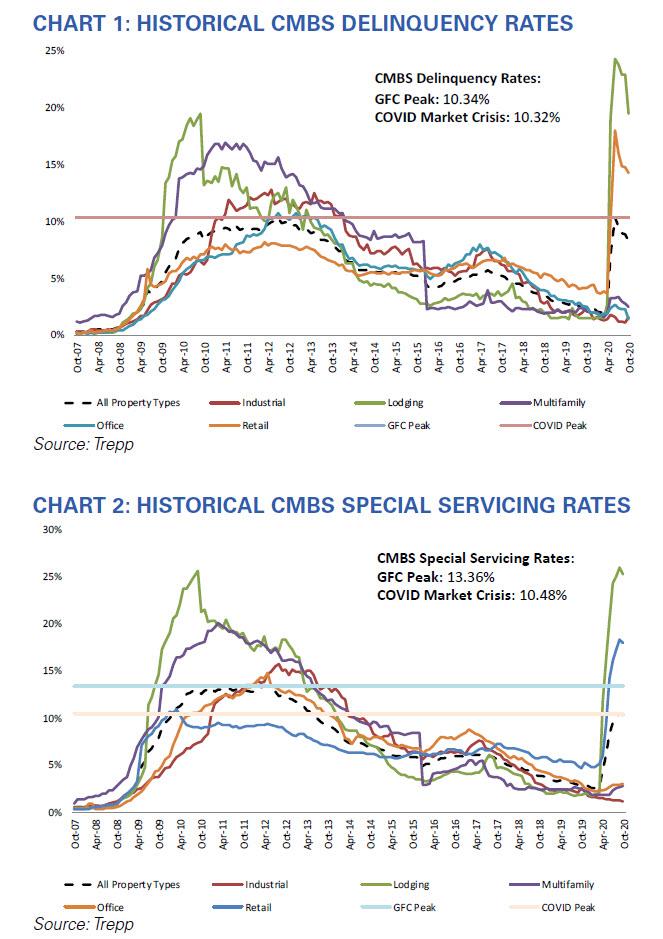 The State of the Markets Amid COVID

By comparison, due to a near complete shutdown of parts of the economy earlier this year, lodging and retail became the two property segments that were immediately hit hard by mitigation policies preventing travel and large social gatherings. This culminated in the fastest rise in delinquency rates we’ve seen in CMBS history, with 30+ day delinquency rates hitting a near all-time high of 10.32% by June 2020 or within three months that the economy transitioned into lockdown mode. Much of the increase was driven solely by a surge in lodging and retail delinquencies, which moved up to 24.30% and 18.07%, respectively, that same month – the highest on record for the CMBS industry. The distress for all other property types such as multifamily and office, however, remain more contained as tenants stay locked into long-term contracts for the time being or in the case of industrial, somewhat abated by the expansion in online shopping. Similarly, special servicing rates during the COVID crisis also clocked in at new all-time highs for lodging (26.04%) and retail (18.32%) in September, bumping the overall reading to a post-GFC crisis high of 10.48%.

With all pockets of the economy coping with the challenges of a public health crisis together, large volumes of CMBS loans suddenly needed forbearance and other financial respite as master and special servicers stepped in to process workouts and other modification requests. After a thorough review of thousands of special servicer commentary and supplementary loan materials, Trepp estimates that more than $31.2 billion across 800 loans have been granted forbearances thus far based on September remittance data, which represents about 5.5% of the non-agency CMBS universe. Roughly 64% of that forbearance tally is backed by lodging and another 28% is comprised by retail loans. This has helped to reduce overall delinquency rates starting in July as new 30+ day delinquencies have been leveling off thanks to a gradual reopening of parts of the economy and borrowers becoming authorized to tap into reserves to meet debt service needs.

In the case of the primary issuance segment, issuers resumed bringing new deals to the market by May in hopes of clearing out their loan inventories ahead of an uncertain November election outcome. Though a good chunk of loans being securitized in new issue transactions have been pre-COVID originations and are limited to seemingly more “safe” property types that exclude lodging and retail, AAA spreads have generally retraced all widening that took place during the early months of the crisis and have returned to levels from early this year. New conduit offerings in September/October were being executed in the S+86 to S+92-range for the LCF AAA, significantly tighter than the S+138 to S+145 prints in May and June of this year that came during the height of the volatility (while subordinate spreads continue to remain wider). This stood in stark contrast to the primary market rebound following the GFC as the segment was essentially frozen with nil issuance for 21 months between 2008 and 2010. 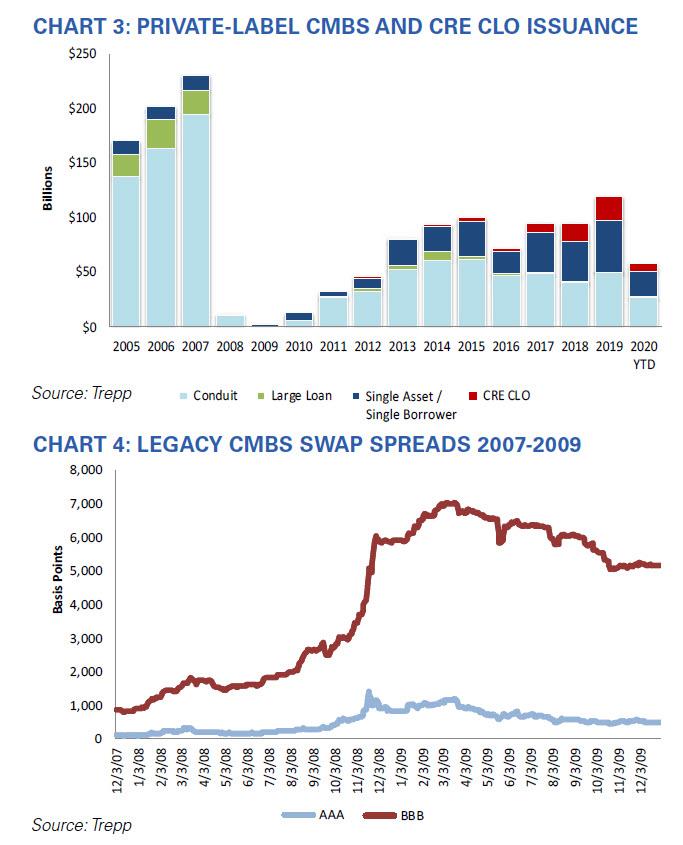 Other Indicators for CRE Performance

With the COVID volatility coming so abruptly, many industry watchers have turned to other indicators and data points as a measure for how the CRE segment has been holding up, especially given how difficult it can be to accurately diagnose and track loan performance in today’s more opaque environment. This gave rise to new ways of interpreting and analyzing CMBS servicer data, such as looking at loans in grace period as a gauge on the direction of future delinquency rates; reading through servicer notes for extra color on modifications, DIL proposals, and context on individual CMBS borrowers and properties; and reviewing valuation haircuts and appraisal reduction amounts (ARAs) assigned post-COVID. In addition, many have also started to keep watch on loan paid through dates as a benchmark for “shadow” delinquencies – also known as loans for which a payment has not been made to the latest month but that reflect a “current” payment status as per the terms of a forbearance approval.

Based on an October 2020 snapshot, there is another $2.7 billion in lodging loans and $3.0 billion in retail loans that are considered “current” that are not paid through the month of October, which amount to about 4.15% and 2.77% of the bucket for all “current” loans for those two property types, respectively. If those loans were added to the delinquency calculations, the overall reading would be 2-3% higher for each of those two property types than what is reported.

Since the start of the pandemic, appraisal reduction amounts (ARA) have already been climbing up steadily as current levels only mark the beginning of this increase. ARAs are expected to continue to rise over the next several months as servicers work out loans for borrowers that cannot meet debt service payments after forbearance periods come to an end. 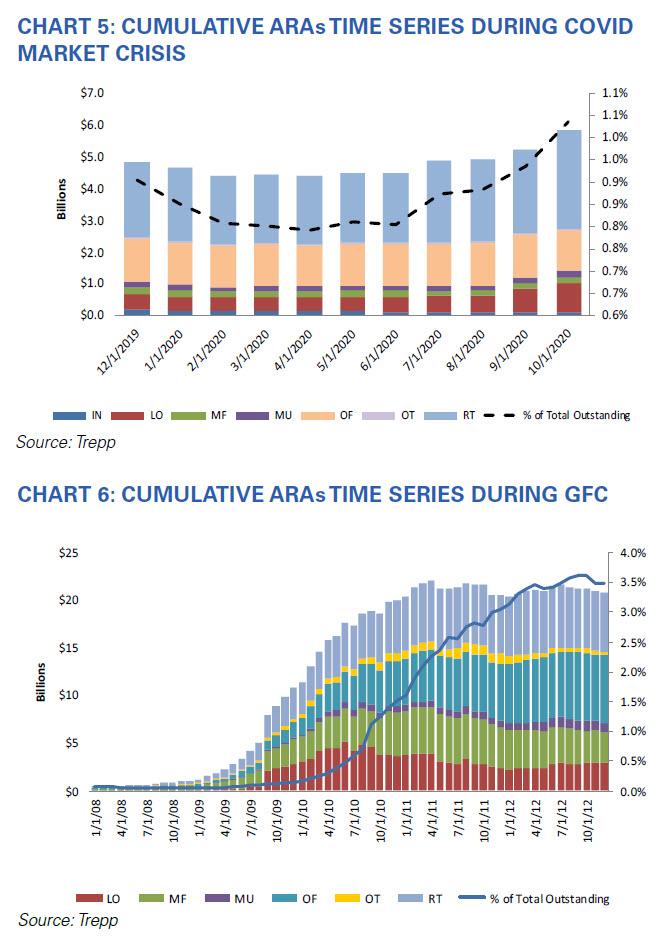 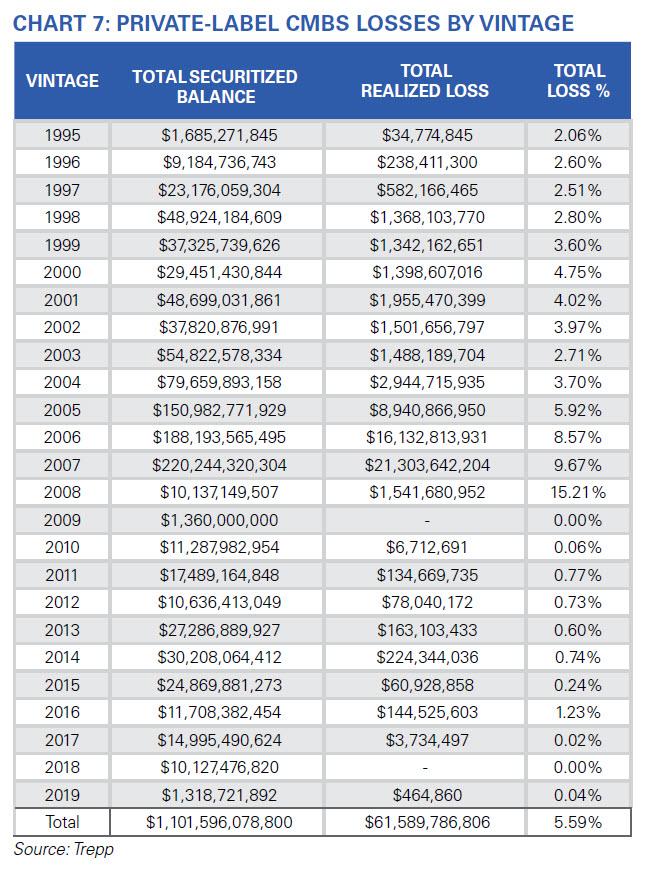 Due to the compressed time frame of the current market disruption and there being limited signs of activity resuming back to pre-pandemic levels any time soon, Trepp has started to see more instances of CMBS borrowers expressing a willingness to “throw in the towel” or return the collateral to the lender earlier on. A review of special servicer notes for recent months show that more than $3.9 billion in outstanding balance across 100 loans have a deed-in-lieu pending that currently do not reflect a REO loan status. The list of loans tied to borrowers who are considering handing back the keys encompasses many large mall and hotel loans such as the $126.4 million loan behind the Westfield Citrus Park shopping center in Tampa Florida (MSBAM 2013-C10) and the $36.4 million loan behind the Sheraton Suites Houston in TX (GSMS 2014-GC2).

From a glass half full perspective, the CMBS industry has come a long way since the GFC and banks today are both more disciplined and better equipped to handle financial stressors through new regulatory mandates requiring greatly enhanced capital positions and the passing of annual stress tests to ensure bank robustness. The US Federal Reserve has also moved swiftly and proactively over the past few months to stabilize the US economy via means of injecting liquidity, keeping interest rates low, and other government-sponsored quantitative easing and bond buyback programs, a likely response to its experience dealing with the previous recession. For CMBS, the industry has undoubtedly proved its resiliency weathering through a number of stumbling blocks and hurdles just in the past decade, which are not limited to refinancing the Wall of Maturities and the introduction of new legislative measures. Over the years, there have also been several structural and sector-wide improvements that have been built in, which include better tranche-level credit enhancements, more investor protections, tighter underwriting, greater issuer “skin in the game” through risk retention, and ongoing efforts to boost transparency and reporting.

So, what new changes are in store for the CMBS and CRE sectors as a result of the current crisis? Though most pundits still believe it’s too early to tell, some experts have already pointed to potential revisions to existing reporting guidelines and greater flexibility on the part of the master and special servicers to carry out loan workout and forbearance arrangements. For the broader CRE segment, property owners will have to act nimble and come up with innovative strategies to stay relevant despite the ambiguity of how the pandemic will shape the use of physical real estate space in the years to come. While the road to recovery is expected to be a long one, the hope is that the economy will bounce back more quickly this time around with strong Central Bank support, financial systems in better footing, and markets more prepared to shoulder another economic crisis.

US election: Don Jr told Trump supporters to ‘have some fun’ before Biden vehicles ‘rammed by armed group’

‘Everything is at stake’: Kamala Harris rallies Miami Democrats