Without a doubt, AstraZeneca’s publication of its (obviously rushed) efficacy data has been the biggest COVID-19-related story Monday morning after LA County announced plans to reimpose lockdown-like conditions late Sunday evening. The UK also announced plans to tweak quarantine requirements for travelers and individuals believed to have been exposed to the coronavirus as the government plans a five-day suspension next month to allow Britons to travel and see relatives during the period between Christmas Eve and New Year’s.

Additionally, BoJo confirmed his plans Monday morning, saying that he would lift the national lockdown on Dec. 2 (a little over a week away)  and return England to it regional tiering system which had been in place prior to the lockdown.

After the US topped 12 million cases over the weekend and California lodged a countrywide record (15.4k new cases in 24 hours), the number of new cases reported over the prior 24 hours declined on Sunday. 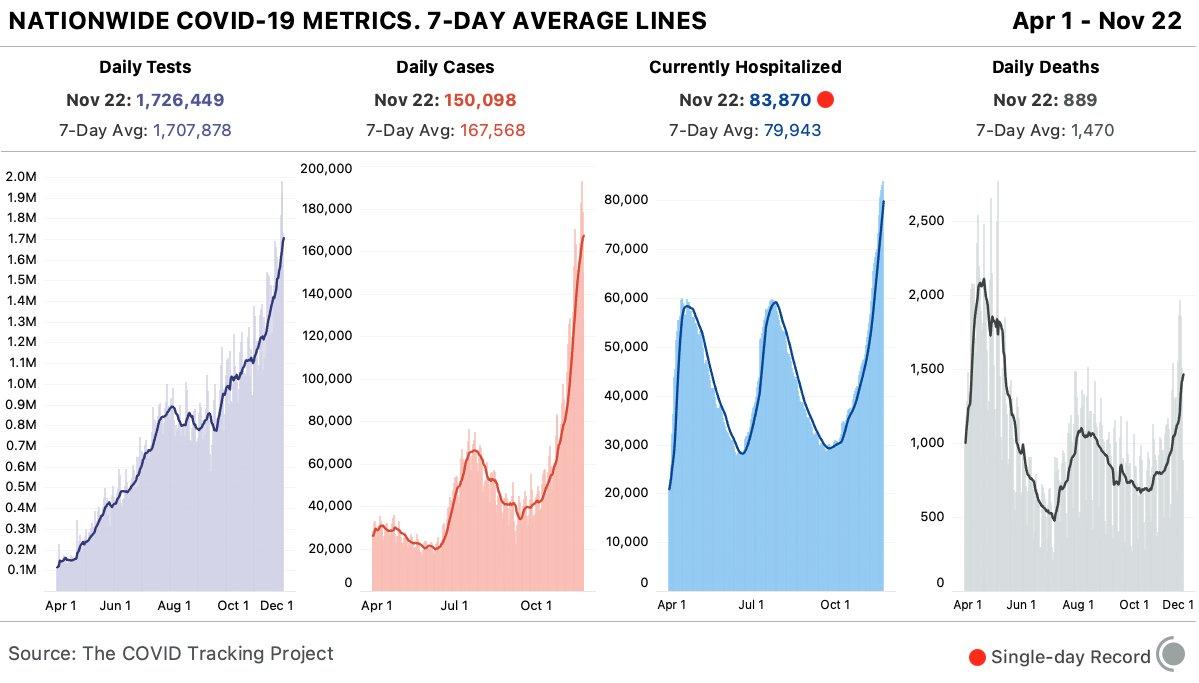 As more stakeholders weigh in on the AstraZeneca-Oxford data, Oxfam celebrated the fact that the AZ vaccine was seemingly tailor-made to meet the needs of poorer nations (aside from the fact that it’s not quite as effective as some probably hoped).

“This is another breakthrough and while the results from the… trial are slightly less promising than those from Pfizer and Moderna, they have pledged to do far more to make sure the vaccine reaches people in poorer countries.”

In the US, the Midwest remains the hardest-hit region, as millions of Americans continue to ignore the CDC’s warning to avoid holiday travel, inspiring some experts to warn about the possibility of a post-holiday surge in cases – along with hospitalizations and deaths. 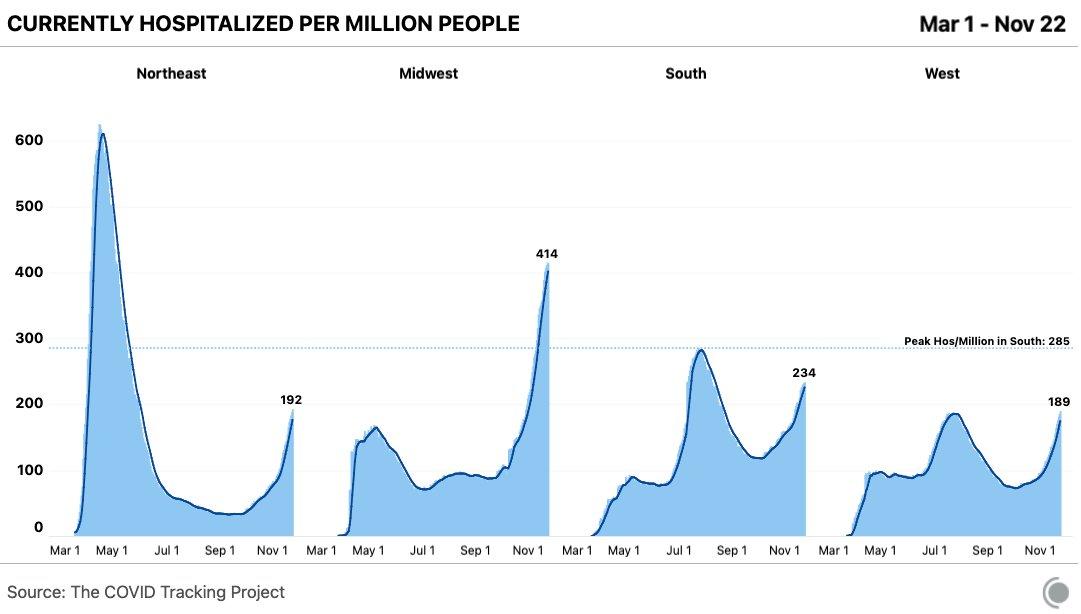 And here’s a breakdown of the 7-day averages for new cases across all 50 states. 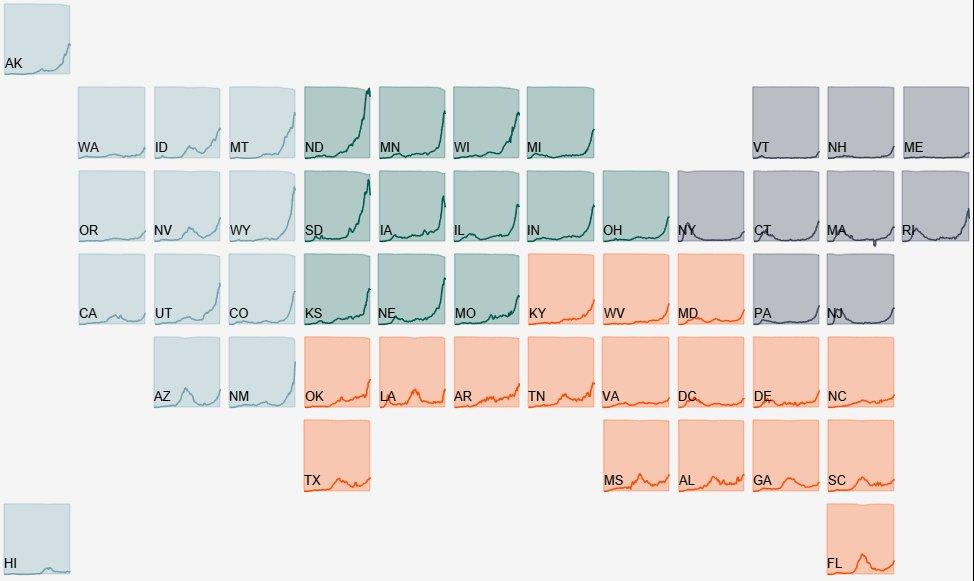 As we await the latest data out of the US on Monday, it’s worth noting that German Chancellor Angela Merkal over said during this weekend’s G-20 virtual summit that securing access to vaccines for the world’s poorest should be a top priority.

Here’s some more COVID-19 news from overnight and Monday morning at the start of this holiday shortened week in the US:

Regeneron announced that its antibody cocktail REGN-COV2 received Emergency Use Authorization from the US FDA. FDA stated that it authorized monoclonal antibodies for treatment of COVID-19 in which casirivimab and imdevimab are to be administered together by IV infusion and were shown to reduce COVID-19-related hospitalization, but noted benefit of casirivimab and imdevimab treatment has not been shown in patients that were hospitalized for COVID-19 (Source: Newswires).

Pfizer’s vaccine could receive UK approval in the week ahead with British regulators to begin the formal review of the jabs by Pfizer and BioNTech, while NHS was reportedly told to be ready to administer them by December 1st Subsequently, regulators say they have received the data relating to this. (Telegraph) Seperately for Pfizer, Operation Warp Speed’s Slaoui has suggested that the FDA could act on the Co.’s COVID vaccine as early as December 10th (Source: Newswires).

Roche CEO expects the tens of millions of COVID-19 tests the Co. is producing won’t be enough this winter amid the surge of infections across the northern hemisphere (Source: Newswires).

UK PM Johnson is to tell MPs on Monday that he will end the lockdown in England on December 2nd and replace it with toughened-up tiers, while the new plan will see more areas enter the stricter tiers although reports added the plan for a new stricter tiered system is under threat after 70 Conservative MPs threatened to veto it in Parliament. There were also reports that PM Johnson is expected to set out ‘major’ testing plans which will form part of stronger tiered local restrictions to replace England’s lockdown. UK PM Johnson is to give a statement at 15:30GMT/10:30EST (Source: The Telegraph).

Germany’s senior politicians stated that they will have to extend current measures to contain the pandemic into December, while other reports noted that Germany was considering a partial lockdown until December 20th.(Source: Newswires).

South Korea is imposing stricter social-distancing measures including limiting restaurant hours and social gatherings, as a surge in cases threatens to undermine earlier efforts to contain the pandemic, while the alert level for the Greater Seoul area was increased to 2 from 1.5 effective Nov. 24. This will ban gatherings in high-risk venues such as night clubs and karaoke bars, while restaurants are prohibited from serving after 2100 and can only operate takeouts and deliveries (Source: Newswires).

Hong Kong Health Secretary Sophia Chan stated that Hong Kong will make a payment of HKD 5,000 to anyone in the city that tests positive for COVID-19 in an effort to get people tested (Source: Newswires).

Ready for Thanksgiving 2020? Make sure you do these 8 things before Thursday

CDC advisory committee discusses who should get first vaccine doses

Ready for Thanksgiving 2020? Make sure you do these 8 things before Thursday