No matter how many celebrities tweet or share Instagram posts imploring Americans to ‘just stay home’ this holiday season, more than a million Americans per day have continued to board planes, trains and automobiles as we reach the peak of the Thanksgiving travel season.

About 1 million Americans a day packed airports and planes over the weekend even as coronavirus deaths passed 250,000. Though traffic is down by roughly 50% compared with last year, it’s worth noting that millions of Americans – particularly younger millennials who are relatively new to the workforce – have been living with family since moving back in with mom and dad while working remotely this spring.

To be sure, the crowds are only expected to swell, with next Sunday likely to be the busiest day of the holiday period. To be sure, the number of people flying for Thanksgiving is down by more than half from last year because of the rapidly worsening outbreak.

The 3 million who went through US airport checkpoints from Friday through Sunday marked the biggest crowds since mid-March, when the COVID-19 crisis took hold in the US. According to Bloomberg, “many travelers are unwilling to miss out on seeing family and are convinced they can do it safely. Also, many colleges have ended their in-person classes, propelling students to return home.”

As hospitals across the Midwest struggle with overcapacity and New York reopens an overflow ward on Staten Island, it looks like new case numbers have started to trend lower, suggesting that numbers may have peaked, despite increasingly dire predictions for mortality heading into inauguration day. 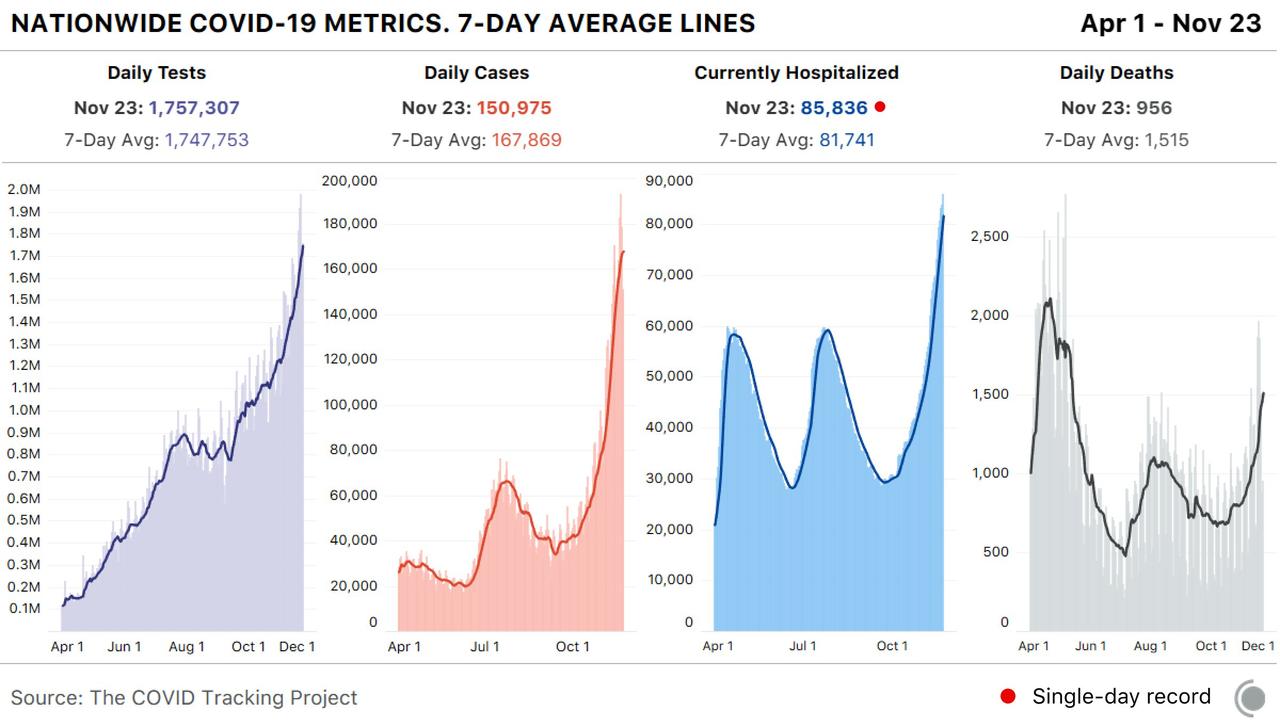 Only 4 US states have fewer than 100 people per million hospitalized due to COVID. 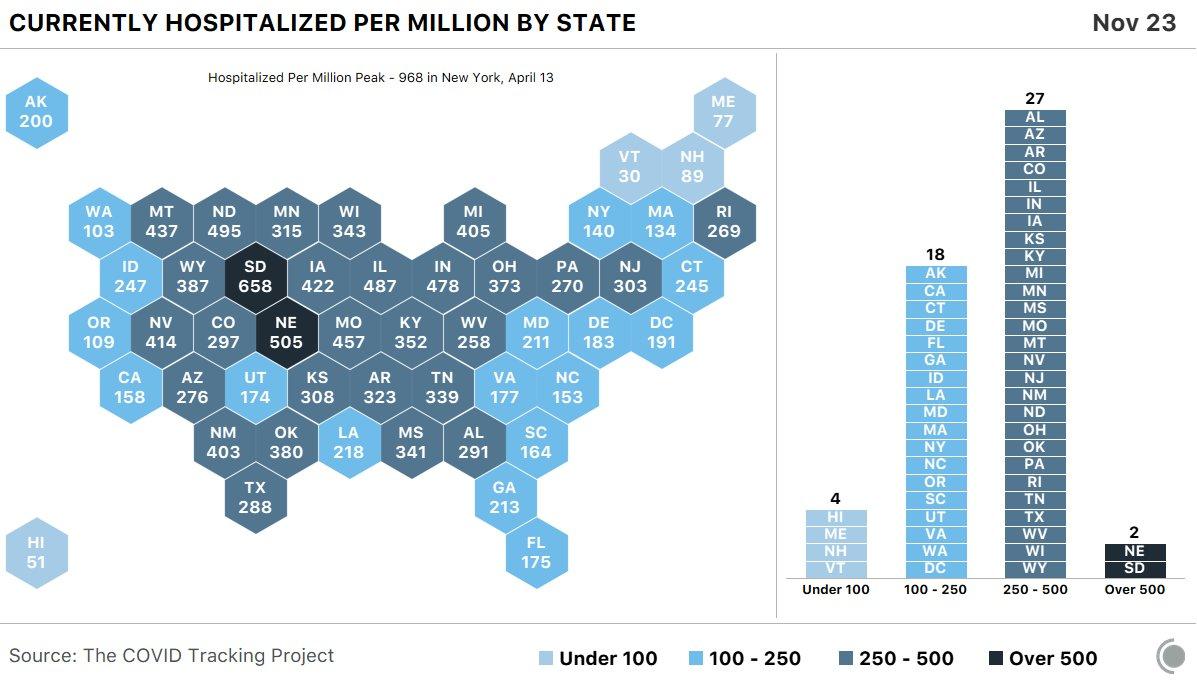 In the southwest, New Mexico is standing out as new cases, deaths and hospitalizations are all at all-time highs. 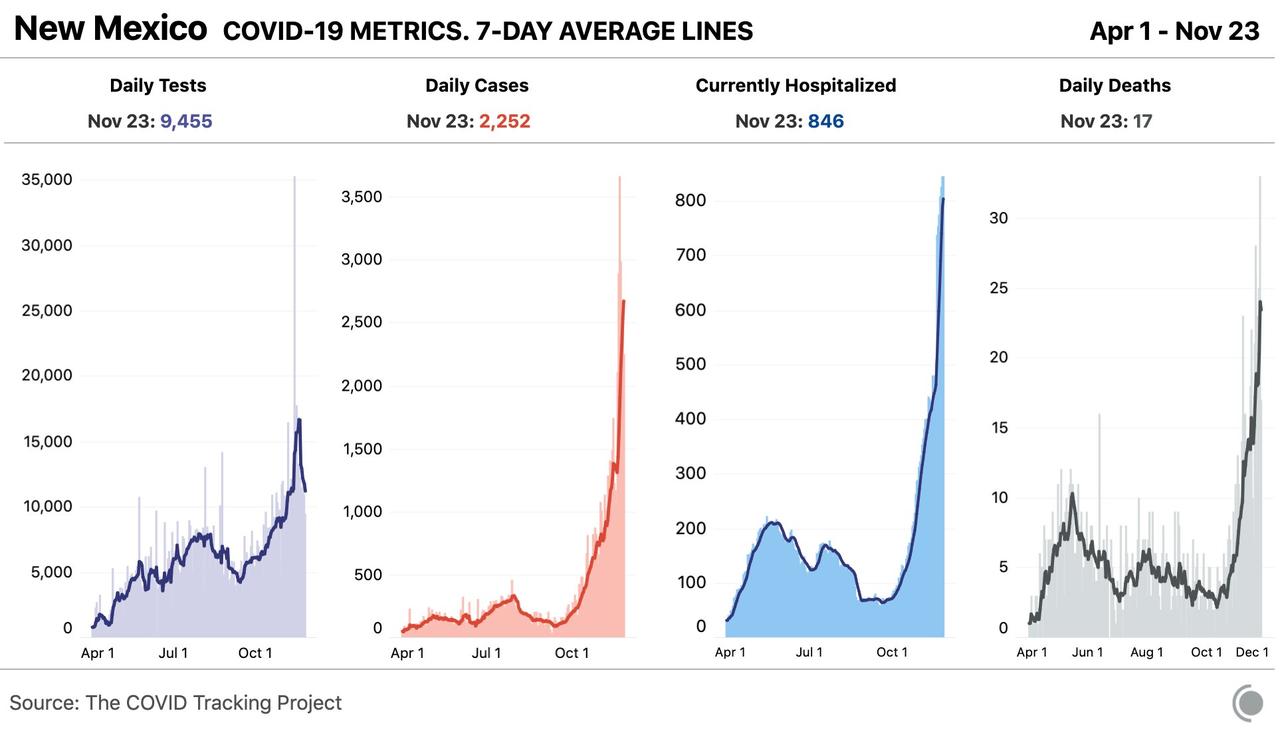 Looking abroad, Hong Kong authorities announced Tuesday that they would shut bars, nightclubs, and bathhouses from Thursday until Dec. 2 – a period of less than a week – as local coronavirus cases rise, Secretary for Food and Health Sophia Chan said during a briefing on Tuesday.

The number of tables allowed at banquets will be capped at 10, with four people per table. The 4-person public gathering limit, 4-per-table rule at restaurants and mandatory mask- wearing will remain in place even after the rest of the restrictions end. The news comes as Hong Kong reports 80 coronavirus cases, of which 69 are local, said Department of Health official Chuang Shuk-kwan.

Although the number of new cases being reported worldwide has slowed over the past week, the international total of confirmed COVID-19 cases stands just below 60 million, while deaths are on the verge of 1.4 million.

Turkey reported a record number of deaths from the coronavirus, highlighting the dilemma facing policy makers who are trying to contain the current surge in new cases without shutting down the economy again (Source: Bloomberg).

France reported 4,452 Covid cases on Monday, the lowest number of confirmed new infections in 24 hours since Sept. 28. The seven-day average of cases fell to 21,918, the fewest in more than a month (Source: Bloomberg).

There Were Two Americas Today As Dow Struck 30,000

There Were Two Americas Today As Dow Struck 30,000