Two weeks ago, Erdoganomics ended with a thud when the president of Turkey, Erdogan fired his central bank puppet – who has been programmed to only cut rates in the process sending the Turkish lira plummeting – and replaced him with a new surrogate, this time one meant to restore confidence in the currency by hiking rates – a U-turn to what had been Erdogan’s preferred monetary approach since 2018 – which is what Turkey did last week when it hiked rates by 475bps to 15%.

It also provided solid support for the lira, which after plunging as low as the mid-8s against the USD in the first week of November, only to soar as high as 7.50 when it emerged that Erdogan had capitulated on his low rates policy. However, slowly the realization appears to have dawned on traders that hiking rates in a decimated economy, where net FX reserves are now negative… 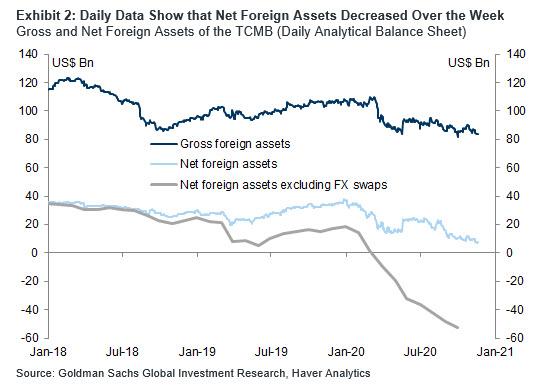 … may not be the best course of policy after all, and the lira started to slide a few days ago, a move which was accelerated sharply today with the lira dropping back below 8 against the USD after the The Turkish Banking Regulation and Supervision Agency (BRSA) decided to remove the asset ratio rule as of December 31. 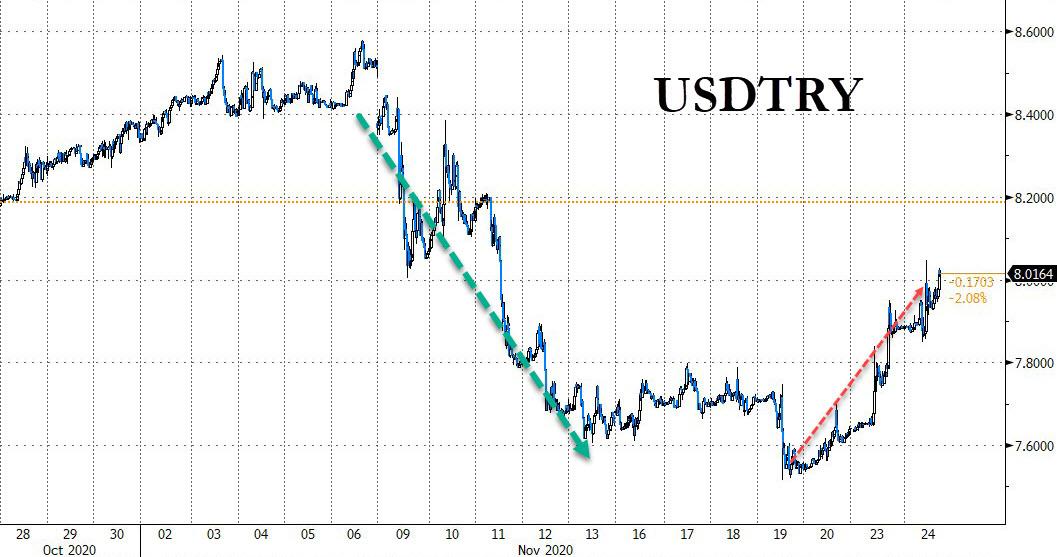 The asset ratio rule stipulates that banks’ ratio of loans, securities and TCMB swaps to deposits have to be above 90% for deposit banks and 70% for participation banks. In the numerator, loans, securities and TCMB swaps have coefficients of 1.00, 0.75 and 0.50, respectively. In the denominator, deposits have a coefficient of 1.00 except for FX deposits in excess of FX loans, which have a coefficient of 1.75. With this measure, the BRSA aimed to encourage lending and discourage dollarization.

The only problem is that according to Goldman, following this decision, it is likely that banks will do just the opposite and cut back on lending, either as they actively deleverage, cutting back on supply, or as they respond to lower loan demand — the weighted average consumer and commercial loan rates have already reached 19.8% and 17.0%, respectively.

Lower loan growth will likely lead to slower domestic demand and, as a result, lower imports. And while this decision would in theory be supportive for the Lira over time by its contribution to a higher current account balance, it is sparking fresh questions about just how acute the economic hit to the Turkish economy will be as fundamentals slowly reinstitute themselves beyond merely using the lira as a carry pair.

Worse, as Goldman notes, banks deleveraging can lead to lower external debt rollover ratios and more outflows from the banking sector. Furthermore, since the asset ratio rule also discouraged holding FX deposits so its removal may not be positive for dollarization in the short run.

The bottom line is that this decision can be interpreted as Erdogan allowing for lower credit growth and, hence, accepting lower economic growth to support the current account balance going forward. Lending rates have also reached levels that are contractionary, all of which have led to the sharp drop in the lira today which is ironic as the move was meant to further stabilize what has been the worst performing currency of 2020. Finally, with the weighted average rate on TRY deposits still at 12.3%, Goldman thinks that higher rates will be required to restore domestic confidence among depositors and expect the policy rate to eventually rise to 17%. As such it is hardly a surprise that the TRY is plunging again, daring the CBRT to hike rates again at the first possible opportunity, a move which paradoxically will only make the near-term economic rout that much worse.

How To Celebrate Thanksgiving Amid Toxic Politics & COVID-19 Lockdowns

A man was killed after three separate drivers ran him over. All of them fled the scene.

A man was killed after three separate drivers ran him over. All of them fled the scene.

Elon Musk promoted coronavirus misinformation for months. Then his own infection kept him out of SpaceX's astronaut launch.